At least I prepared you — when you saw her signing her marriage license in the legal ceremony, her pantsuit didn’t alarm, did it?

Thanks to some decent WBO fashion sleuthing, you were totally prepared for a wide-legged, powder-blue pantsuit.  Though it hasn’t been condemned adequately in the fashion blogs, the fact that you can’t find a full-length picture of it anywhere speaks volumes.  It’s like the Monaco police are trolling the internet, deleting the offense.

Despite the Eagles concert, fireworks show, celebrity chefs and oceans of champagne, the occasion failed to herald the kind of attention Wills and Kate received.  In fact, the event fell so low on the British royalty priority list that they only sent Prince Edward as a rep.

(You know, Prince Edward, the youngest of Queen Elizabeth’s children, the groom in another forgettable royal wedding, the Earl of Wessex…OK I know you stopped reading half a sentence ago.)

Let’s take a look at the Armani dress in the religious ceremony the following day:

According to a press release, Armani explains his design:  “The idea was to go for a completely modern look, without an obvious sense of nostalgia or revivalism.”  I’m not sure what that means, except that apparently it took a lot of work.  According to multiple sources the dress took 2,500 hours to create and featured 40,000 Swarovski crystals and 20,000 mother of pearl teardrops.  The veil alone took 100 hours to embroider.

And yet…it doesn’t wow me.  It is certainly beautiful, but it didn’t send me to the moon the way Kate’s did.  I’m pretty sure it’s the chest and stomach area — something about that just doesn’t win me over.

As for Albert, he looks like he’s on a float in an age-inappropriate Disney World parade, dressed as an unattractive version of Prince Eric in The Little Mermaid.

But it’s not like anyone was looking at him anyway.

I will say the ceremony setting was beautiful, and the castle was a picturesque backdrop. 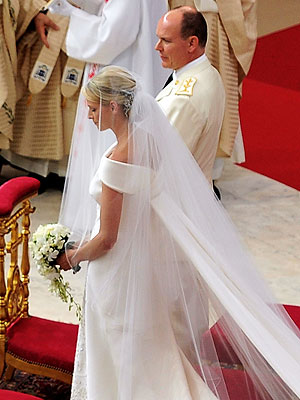 Something is amiss, however, when the bride is  the only one at the wedding who sheds a tear.

Though I don’t think we have to struggle to suppose what brought the waterworks.  It was widely reported that just days before the ceremony, yet another woman hit Prince Albert with a paternity claim.  According to The Telegraph, “Monaco officials privately admitted there is “truth” in a rumour that Albert faces a paternity test.”

Nothing like a paternity test to get you excited for the big day!

Did I mention the woman accusing him hasn’t had the child yet?  She’s still pregnant…I’m no mathematician, but I’m pretty sure that didn’t happen prior to Charlene and Albert’s four-year relationship.

See?  Even princesses have to deal with baby mama drama.

In the end, Charlene may be getting the last laugh.  After all, her new name is Her Serene Highness, Princess Charlene.  Even Duchess Kate isn’t an actual princess by title (though when you’re guaranteed to be queen one day, who’s counting?).

I, for one, am rooting for her, and will raise a glass in the hope that all of Prince Albert’s future children are Princess Charlene’s.

The Other Royal Wedding

1.  Did you know that a royal wedding is happening this Saturday, July 2?

I didn’t think so.  And that’s my point exactly.

We’ve gone from the biggest royal wedding in history to a royal wedding two months later for which no one is even bothering to purchase new hats.  Let’s explore why.

First of all, the wedding in question is that of Prince Albert II of Monaco and former Olympic swimmer Charlene Wittstock.   Hmmm, a prince marrying a commoner…this sounds familiar and compelling…so why isn’t it?

Let’s look at the less-than-appetizing facts:

But before I get too critical, let’s not forget that she is going to be a princess.  Of MONACO, easily one of the most fabulous areas of the Mediterranean.  She’s going to live in a castle, with staff, with nothing more to do than produce an heir and appear at state events.  Sounds like a good deal to me.

Oh, and she gets a ring that takes up half her finger:

On second thought, I don’t think I would take all of that if it meant marrying him.  No offense, Al.

One advantage Charlene has over Kate is two sisters-in-law to turn to for guidance.  Kate married a man with one brother, while Charlene is marrying a man with two sisters, Princess Stephanie (shown below) and Princess Caroline.

One can imagine it would be quite helpful to have a few experienced princesses around to show one the ropes.

Though apparently they haven’t been jumping to serve as fashion advisors, seeing as they are both ill-qualified.  I can’t decide who looks worse — Charlene or Princess Stephanie.  No, Stephanie definitely looks worse. 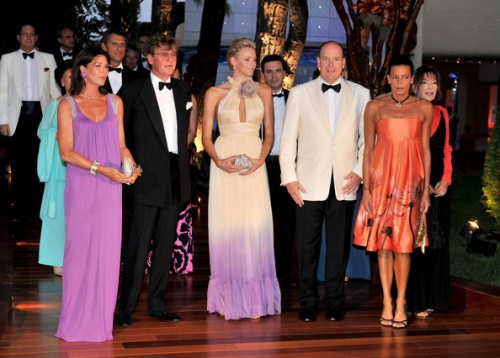 Apparently Charlene agrees.  In a recent Vogue article, she spoke of this particular fashion misstep (at the 2007 Monaco Red Cross Ball),  “Finding my fashion feet has certainly been the biggest challenge,” she says.  “I was literally a fish out of water. I thought it was all fun, fun, fun, and didn’t give my outfit any thought. I had been playing beach volleyball all day, painted my nails red, and threw on a dress. I thought I looked great at the time, but looking back, I realize that my debut into Monaco society should have been better executed!”

When she’s that honest with herself, how can you not feel for her?

I am the first to admit that any lady entering the world stage would probably fail in comparison to Kate the Great, but I can’t help but shudder at some of her choices. 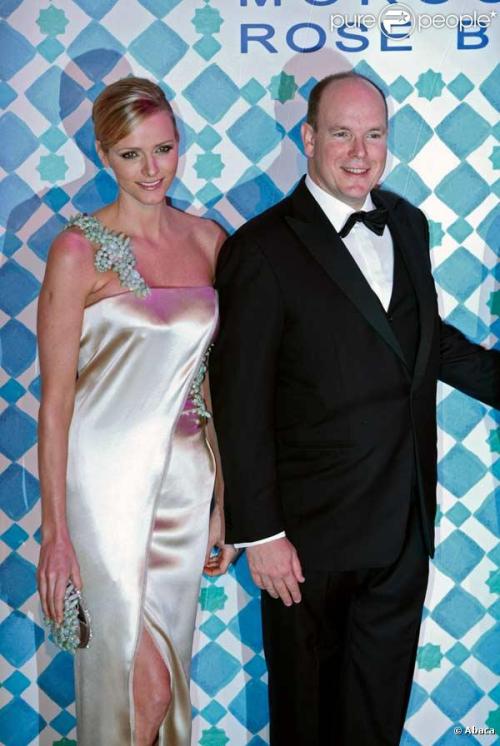 Try not to jump back in your chair when you see this pantsuit:

Which leaves me with the final task of watching and evaluating the big day.  No matter how Charlene looks, one thing is sure: we know there will be hats.  Guests may be pulling them from the back of their closets, but there will be lots of hats.

It was, to borrow the popular British expression, absolutely brilliant. 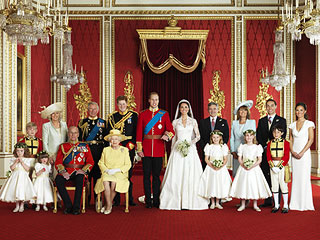 I shot awake at 6AM PST, an hour ahead of my alarm, and I literally only had one thought in my head, the way you only have one thought in your head on Christmas morning, “It’s done!  They are married!”

I know this should be embarrassing to admit, but I got over that admission about a decade ago.

I turned on my DVR and fast-forwarded through Bah-bra and Diane’s two-hour pre-wedding coverage to get to the point of the day — her dress.

Needless to say, it did not disappoint. 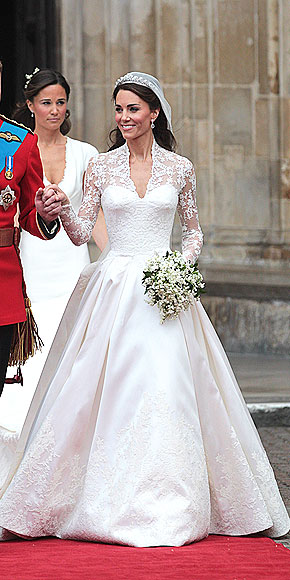 I always wagered that she would use lace, if only because it matches so perfectly with her style and grace.  And, it must be said, she had grace in spades on her wedding day.

If I were an alien visiting Earth on April 29, 2011 and happened to land my spaceship in London, I would never imagine that this lady in white was joining the royal family; I would assume she was leading it.

And as she joined her prince at the front of the abbey, I was only thinking one thing: it’s a shame he couldn’t keep his hat on for the duration of the ceremony.

One of my favorite things about the service was that those leading it managed to use the word “betwixt” not once, but several times.  How utterly English is that?  For the remainder of this post I shall now use that word in place of “between.”

Though we all know I could write the entirety of this post about HRH The Duchess of Cambridge alone (just writing her new title makes me happy), I’m afraid that if I start down that road it will prove as endless as some of the hymns sung during the service.  So let’s move on to the attire of the attendees, shall we?

First stop: cannot be avoided, must be mentioned and condemned immediately:  Princess Beatrice. 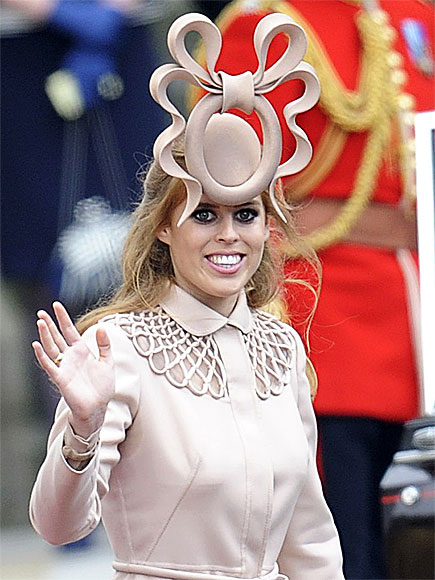 On the other end of the fascinator spectrum lies that other British princess, Victoria Beckham.  Now THAT is a perfect topper.

On a sadder princess note, my former favorite mistakenly thought this was an Easter service and got a little carried away with the color peach: 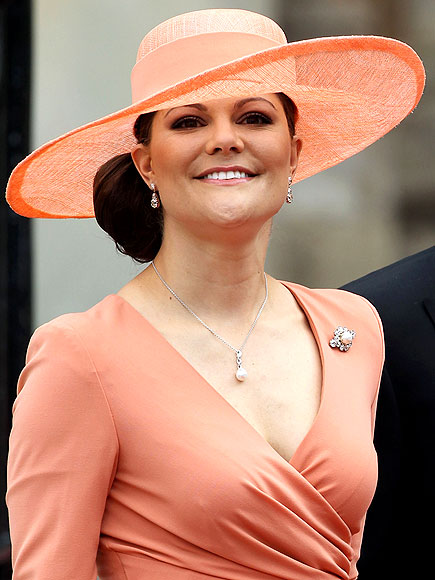 Without question, a real winner of the day was the bride’s sister and bridesmaid, Pippa.  Wasn’t it obvious she was doing all of the work?  And she was doing it in a difficult-to-walk-in, awkward-to-bend-over-in dress. 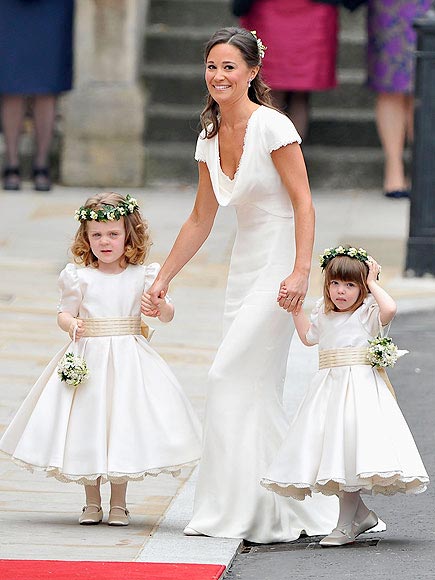 She had to escort the little royals down the aisle, which could have gone wrong a hundred different ways in front of two billion people.  She had to carry her sister’s train for what seemed like weeks, and looked like she was happy to do so.

Also, did anyone else notice a little flirtation betwixt Harry and Pippa as they walked down the aisle?

And who could blame him, when he’s used to dating this:

When they arrived at Buckingham Palace and the crowds were given permission to surge toward the front gate, the sight of a sea of humanity filling the entire mall was overwhelming.  It’s no surprise that Catherine was seen saying “Oh wow!” when she stepped onto the balcony.

In true break-the-mold style, the couple kissed two times.  It almost seemed like they were saying “We actually like kissing, because we actually like each other!  This is not just for show!”  Anyway, I bought it.

After all of the fashion analysis fades and the wedding stops making headlines, I think those who watched it will remember it one way: as a happy event.  It was undeniably exciting, and despite the grandeur it managed to feel strangely intimate.  Somehow Will and Kate brought us all along for the ride, and as silly as it sounds, this fan-since-she-was-13 is grateful.

Here’s hoping the love betwixt The Duke and Duchess of Cambridge is as strong and long-lasting as the stone pillars of Westminster Abbey.

To read about the wedding from someone who was actually there, check out my friend Maggie’s post.

"In good writing, WORDS BECOME ONE with things."
Create a free website or blog at WordPress.com.
Loading Comments...