We went camping and it was fun.

Mike and I are not campers by nature.  We’ve done it several times pre-kids, but most of our camping experiences involved “camping” for three nights at the Gorge so we could watch Dave Matthews Band play three times Labor Day weekend, as they do every year.

It was simpler times.

We’d talked about taking the kids for a classic camping experience, but it wasn’t until our most outdoorsy friends invited us that we packed our bags.  These awesome friends really remove any excuse we could possibly produce, because they not only have four-year-old boy-girl twins like us, they also have one-year-old girl-girl twins.  End scene.

We did not have the courage/masochism to bring our one-year-old along, so we left him with my parents Father’s Day weekend and headed for Lake Wenatchee.

The other kicker in this experience is that our friends invited all the twins they know, so we had no fewer than fourteen four-year-old twins running amok in the forest.  Plus two sets of one-year-old twins.  Plus Hunter.

When we arrived at Lake Wenatchee we were amazed by the beauty of the campgrounds.  It was easily the cleanest, nicest, most well-maintained campground I’d ever seen.  The campgrounds were evenly scattered through the woods adjacent to the lake, with little level squared areas for tents and a little firepit and a little parking place.  I like little.  I like order.  This appealed.

Mike set up the tent, like any dad worth his salt, and the kids hopped on their bikes and took off on the paved road through the campsite.  We were like, oh, this is weird, we don’t have to watch them compulsively because there’s no traffic, and they’ve already found several sets of twins to ride with, and hey here comes our friend Mike with a beer.  Wait, are we liking camping?  Why is this happening so fast?

We took the kids down to the lake to explore and were stunned by the beauty of the mountains rising out of the water.  It’s a common sight in the Pacific Northwest, but it never fails to stop me in my tracks. 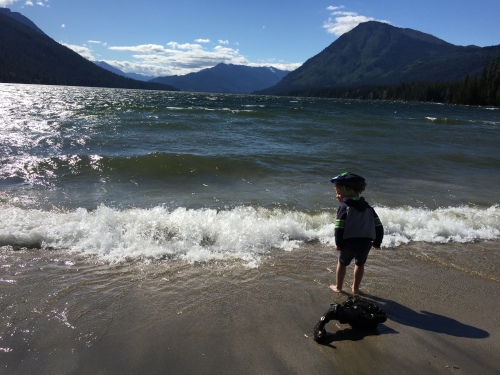 Laura Jean, trip planner extraordinaire, had coordinated meals so we potlucked.  The adults grabbed a beverage while the kids ran hollering through the woods, and we chatted around the fire, amazed that this was working out. 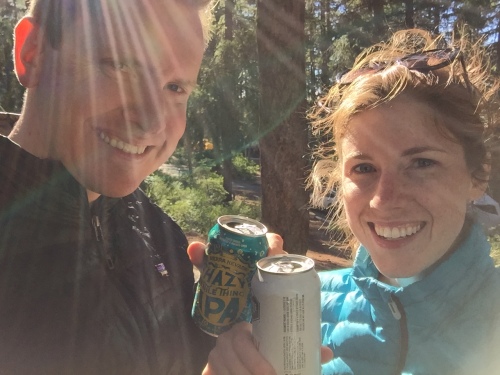 We also laughed at the pure northwest nature of the group.  We were all ensconced in our Patagonia puffers as we emerged from our North Face tents holding local microbrew beers (Seattle Cider Co, in my case).

To remove any doubt that ours was a bandwagon of northwesterners, let’s look at an adorable sample of the children’s names:

The main pain was the mosquitos.  They were legion and relentless.  Even now Arden, who had a fabulous time, says, “Mom we are never going back to that place with the mosquitoes.”

I had pants, leggings, jeans, and the mosquitoes laughed in my face.  As if your cotton and polyblends were any match for us, they scoffed.

At home I counted 90 bites on my legs alone.

But who cares when you’re spending the day with no agenda but paddle boarding, toasty fires, walks in the woods, and a nap?

I thought sleeping would be a titanic problem, given that it isn’t dark in Washington until nearly 10pm, but evidently the reward for all of that outside play is kids who fall asleep at their normal bedtime (well, we gave them 8 instead of 730) from sheer exhaustion.  It didn’t matter that we all shared a tent or that we didn’t bring an air mattress.  The kids conked out and two hours later, so did we. 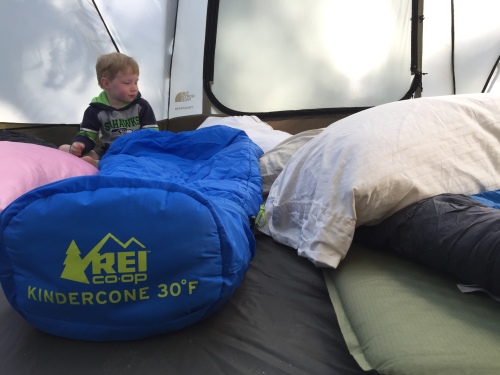 When I was a kid, I had a wide, plaid, flat, freezing flannel sleeping bag like any normal American.  My children have “REI Kindercones” which keep them toasty down to 30 degree temperatures.  Naturally they have whimsical, artistic, satin interiors, because this is the life to which they’re accustomed.

They are so lucky they have their Nana and Papa to spoil them/keep them alive in the woods.  (Thanks Nana and Papa!)

And they’re so lucky they have their mom and dad who don’t bring sleeping pads, to keep them humble.

I brought Jiffy Pop, because I thought it would amaze the kids to hold it over the fire and see it burst into a bubble and then give them their favorite treat.  It did not.  I bought three and it took all three for us to make one that wasn’t both charred and holding most of the kernels hostage, unpopped.

They didn’t care.  They had kid-sized camping chairs!  Well, my kids didn’t, but we’re not at that level of camping yet. 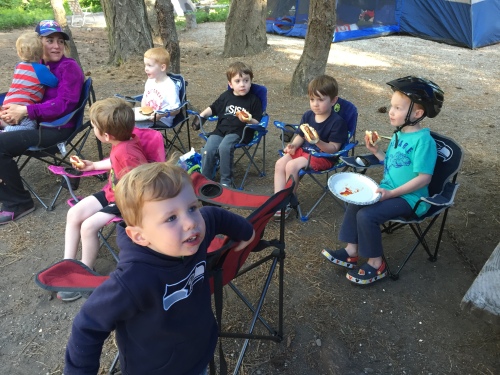 I thought camping for a mom meant nonstop work; food prep, cooking, packing food away, washing children’s hands and other parts, constant bathroom trips, etc and while it was some of that, it was also a whole lot of rest.  Not being at home meant I couldn’t occupy myself with chores and other to-dos, so I had time to just sit in a camping chair, drink my tea, swat my mosquitoes, and read my fast-paced novel.  That was totally unexpected and so, so good. 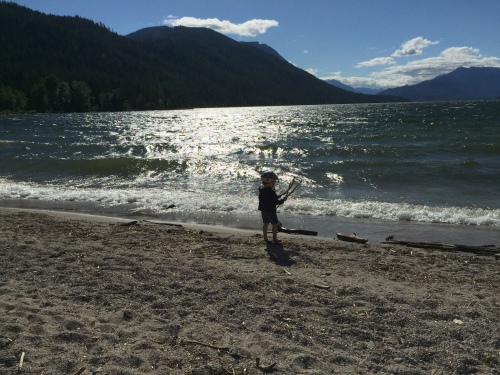