Last April 2, a day which will live in infamy, we attended the opening of the new 520 bridge.  For you non-Seattleites, the 520 bridge is our famous floating bridge erected and unchanged since the ’60s, now to have a new, longest-floating-bridge-on-earth edition erected right next to it for our commuting (and the governments’ tolling) pleasure.  The high-priced tolls have left many Seattleites more than a little outraged, so this event was intended as a goodwill gesture to remove the bad taste from our mouths.  Key word: “intended.”

We said sure, we’ll come to your bridge.

It took twenty minutes just to reach the park-and-ride as we watched busload after busload of bridge-goers pass by.

“THIS many people want to do this??” I said as I watched sardine-filled double-length city buses stream by.  “It’s just a bridge!”

“Why are WE doing it?”  Mike asked helpfully.

We escaped the traffic by parking a block away from the park-and-ride.  We loaded the kids in the stroller and Hunter on my chest and headed for the line.

I did a very aghast, hand-to-the-chest expression as we turned the corner and saw the line for the bus reached the entire length of the park-and-ride.  We shrugged and dutifully headed for the end of it until we realized everyone was two deep — the line snaked all the way back to the front again.  A haunting feeling followed us as we got in line, one of diving into the sea only to realize we had no idea how to swim.

Mike and I spent our time in line strategizing for successful bus boarding.  We sounded like gymnastics coaches, except instead of saying, “You need to pop on that vault and twist hard left to make the double-flip complete before sticking the landing,” we were saying “You need to unload both kids while I’ll hold their hands and the bag, you collapse the stroller and stack it as small as possible, I’ll walk them on and we’ll collectively pray for seating.”

I’m sure everyone around us was assessing our three kid/large stroller situation and concluding that this would be additional free entertainment (or hugely annoying should they be seated next to us).  The bus driver waved us on and we executed our launch plan and strode onto that bus with ease, making me prouder than if I’d actually accomplished something.

The novelty of it being their first bus ride, coupled with the mélange of asses directly in their tiny faces, made for two quiet twins who absorbed every mile of our adventure.

We disembarked and walked out from the underpass into the bright, unusually warm day.  The energy of everyone being off of the punishing buses, the sight of the huge expanse of bridge stretching across Lake Washington, the aroma of food trucks  and the plethora of selfies being taken convinced us this had been worth it.  The kids were excited and we felt victorious for overcoming the annoyances to get to a once-in-a-lifetime event. 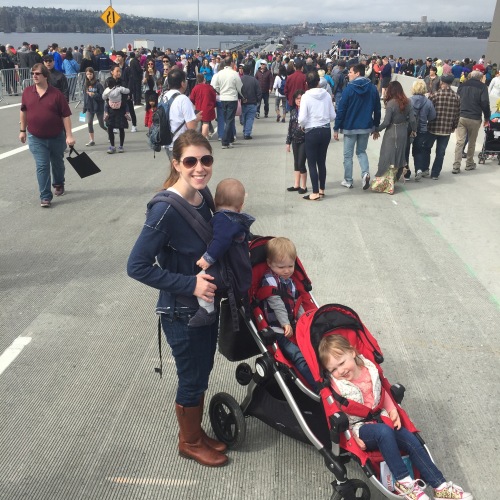 We headed straight for the enormous trucks we knew would enthrall Henry and Arden. 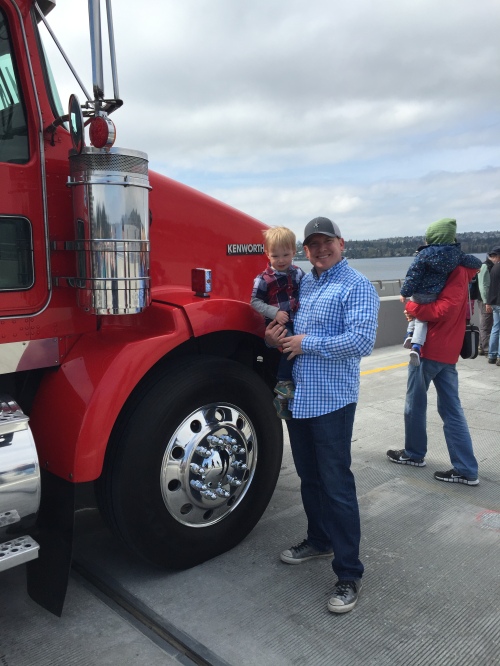 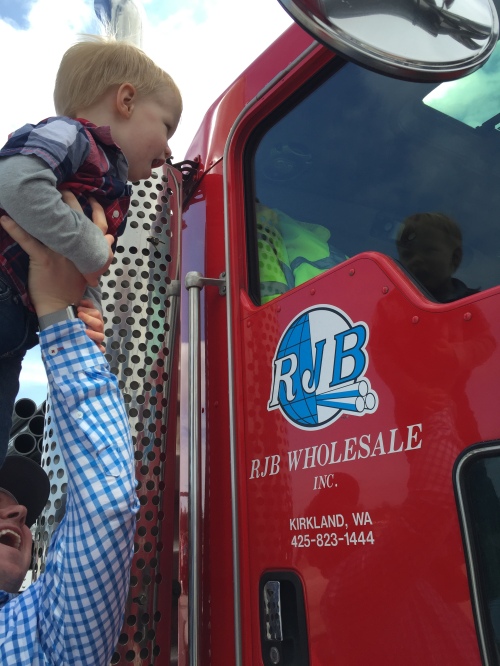 We were having a grand day out.  This was fun!  This was easy!  The views were stellar and we were loving the truck action.  The true peak came when a truck driver invited the kids to sit in his cab.  I thought they might faint. 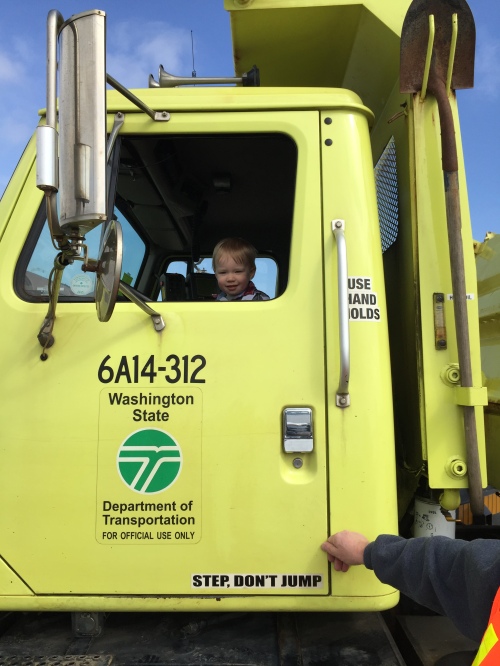 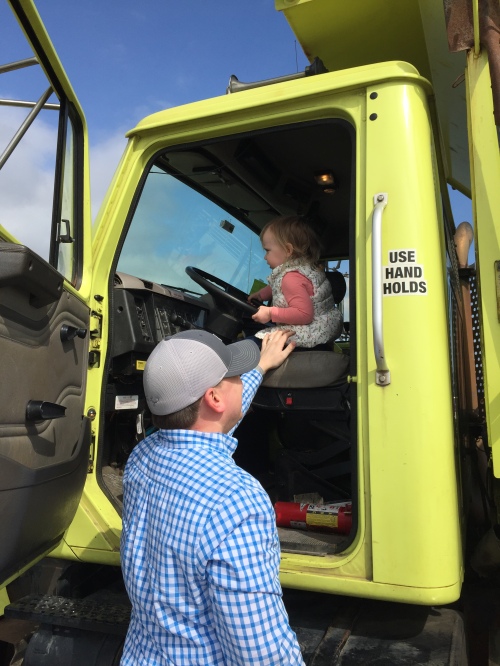 Arden promptly honked the horn which made the truck driver jump like it was the first time he’d heard it.

We spent ninety minutes walking half the length of the mile and a half long bridge, which in kid time is like half a day.  A happy half day, we thought.

We were still patting ourselves on the back when we decided to head to the food trucks for some lunch.  The kids were getting hungry and we knew if we didn’t feed them we’d be heading straight for meltdown town.

As we approached the row of food trucks, we saw deeply frightening lines, lines that would make the heartiest foodie abandon all hope.  We decided we’d just hurry home and feed them there.  Now as I type the words “hurry home” I throw my head back and laugh.  Oh the naiveté.

We moved through the crowd toward the bus line as the kids whined for food.  All of a sudden we stopped; the sea of people we were moving through wasn’t on our way to the bus line, it was the bus line, and it stretched back along the bridge so far we couldn’t see the end.  What we could see was the end of our sanity.

Panic set in.  The bus was the only way off the bridge.  We hadn’t packed any food, like absolute fools.  The kids were hungry, tired, and beginning the meltdown.

“I’ll get in line for the bus and you go get those tacos we saw.  Then we can at least feed the kids while we wait,” Mike suggested.  “But no onions!  They had pickled onions!”  He strapped Hunter to his chest and pushed the twins in the stroller over to the line of misery.

I ran to the taco truck and waited twenty minutes to order, specified no onions, and twenty more minutes to receive the tacos.  Before they came out, my phone rang.

“WE’RE AT THE FRONT OF THE LINE.  WHERE ARE YOU?” He was officially freaking out.

“I’m waiting for the tacos! What am I supposed to do!?  Just let people go past you until I can get there!” I said.

“Arden has peed her pants and is crying!” he yelled.  “Henry is asleep!  How do we get him on the bus!?”  He, and now I, was in pure parental panic.

Seventeen years later, our tacos appeared, absolutely riddled with pickled onion.  I sprinted to the line, where Mike stood holding a sobbing (and soaking wet) Arden, a passed out Henry, and a fussing Hunter.  As I ran I realized that we not only had no time to eat the tacos, but both my hands were holding plates, thereby making me useless for helping us to board the bus.

Mike was in that dark place of parental frustration and helplessness so acute that there was no reaching him.  He was enraged and I was panicked and I kept saying, “I think I’m having an actual panic attack, what are we going to do!??”  There wasn’t a single surface where I could put the plates, Arden was lunging at me for comfort, the line was moving, people behind us were angry, and there was an enormous feeling of anxiety covering the crowds.

Before we could think any further, the WADOT official forced us to cross the street to the waiting bus.  We stood there waiting to board, me telling everyone to EAT as fast as they could, when Mike looked down and exclaimed, “I SAID no onions!” with such contempt I actually thought he might jump off the bridge.  And who could blame him?  I might have followed.

The bus driver hollered at us to get on the bus and instead of trying to do our original maneuvering, I just said, “Push the stroller on the bus!” and Mike hoisted the whole thing on, kids and all, and in a miraculous moment for which I am still grateful, it worked.  We were the last ones on the bus, and the stroller fit right in.  I heaved a sigh of relief so intense I am still having aftershocks.

Then we chowed.  When I say “we” I mean our offspring.  We stuffed those tacos in their mouths, onions and all, and we didn’t get a lick of one of them.  They inhaled street tacos like they had been raised on them.

At the end we all had hands covered in pork sauce, and a gracious angel from heaven reached over and handed us some baby wipes from his bag.  It was the perfect moment of grace after our waking bridge nightmare.

Later I compared notes with a friend we’d run into on the bridge, and she said they had felt so trapped that they actually climbed the grass hill of the overpass with their two-year-old and nine-month-old, stood on the bridge overlooking the bridge and ordered an Uber to take them back to the park-and-ride.  Forget car seats; they tossed kids in that sedan without hesitation. Anything to escape the special circle of hell that stewed beneath them.

When I heard this story, all I could do was nod yes, yes, a thousand times yes.  It was every man for himself, it was desperation, it was parental disaster.  Most importantly, now, it was over.