Though I have discussed nieces and nephews on this blog before, I think we can all safely agree that I have never written about the birth of nieces, nephews, or any other baby.

Until last week, I had never attended a birth, either.  Now that I’ve attended one, I think it’s time to write about one.  And who better to write about then my new darling niece, Lillian Ann Goodman?

Being a week old, Lillian isn’t really prepared to be interviewed about her introduction into the world, so I will be working with her parents to ensure their story is honored here, as they remember it.  I am telling it from my perspective, but there are things I couldn’t see or hear and parts of the story I missed, so I will be filling it in with the details they provide.  Many thanks to Phil and Rach for participating in the telling of this story.

At around 9AM Saturday, Mike and I were in our pajamas, pouring hot tea and coffee for ourselves.  Mike looked up from his phone and told me, “Rach wants to know if we want to have breakfast at George’s this morning — her contractions have started and she needs a distraction.”

I never turn down the Goodmans, or breakfast, so we got dressed and walked down the street to our favorite Saturday spot.  Miraculously, there was no line, so we got a booth in the back and settled in to wait for Rach and Phil.

When they arrived, Phil slid into the booth after making a joke about Rach being unable to fit — and it wasn’t far from the truth; her due date was the day before, so she was 40 weeks pregnant.

We chatted about how she was feeling, if they were packed and ready, how they were sleeping.  We couldn’t believe the enormity of how their lives were going to change and we talked about how excited we were to know the sex of the baby.

Suddenly, Rachel stopped mid-sentence and held her stomach; she closed her eyes and held her breath for a moment.  We all stopped and stared without meaning to.

“Was that a contraction?” I asked.  “How often are you having them?”

“Not that often,” she replied.  “Every 15 minutes or so.  It started last night so I haven’t slept.”  It hit all of us that we were munching on toast while  one of us at the table was in the first stages of labor — it was totally bizarre and kind of awesome.

I asked Rach if she thought I had enough time to go to a glassblowing class in La Conner that afternoon, because it was a five-hour trip and I knew she wanted us at the birth.  She said the baby wouldn’t be coming for many more hours, so it was perfectly fine to continue with our plans. 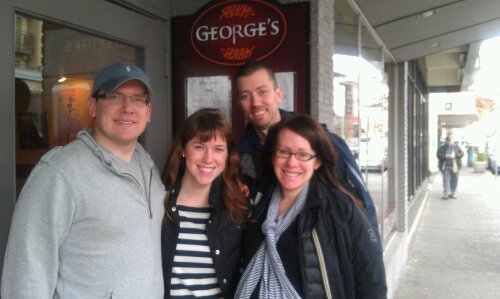 And she was right.  It wasn’t until 9:45PM that night that we got a text that said, “Things are progressing.  We’ll likely be at the birth center in the middle of the night or morning.  We’ll let you know.”  An hour later, Rach and Phil called their doula to come to their house to help them through labor.

After waking up Sunday at 8AM, I immediately checked my phone to see if there was any progress update from Rach and Phil.  I saw a text from 5:06AM, “We’re headed to the birth center, but wait to come over til we get settled and checked out.  It could still be quite early.”  Before I could get excited and alert Mike, I saw another text after that at 6:13AM, “Going back home.  100% effaced but only 4cm dilated.  Heading home to rest.  Please pray for rest.  Sooo tired.”

We felt deflated by the false alarm, but we couldn’t imagine how much more discouraged they must have been; we were sure they’d been up most of the night — for the second night in a row.

Wendy, Rachel’s sister, had arrived the day before to support Rachel through labor, and she and Colleen (Rachel’s mom, my mother-in-love) went to their house Sunday morning to help with whatever needed doing.  They worked with Phil and the doula to coach Rach through contractions, did some cleaning and prep work for the house, and generally offered moral support.  They also acted as communication directors, fielding calls and texts from the family who needed updates.

At 2:56PM, Wendy texted us, “We’ll be heading to center shortly.  Contractions back to back.”   In late February, Phil and Rach had sent us an email with their birth plan, which included having the baby at a local birth center rather than a hospital.  They wanted a natural birth without an epidural or any medically unnecessary intervention.  They had told us many times that they wanted Mike, me, Colleen, Glenn and Wendy at the birth, so as we got close to the due date we knew to make ourselves available.

An hour later, when Wendy said to come on over, we were ready.

I know I’m not the only one who has never been to a birth center, so allow me to describe the scene:  the building is within a business park, just blocks from a major hospital, which I’ll admit was a significant comfort to those in attendance from the family.  When we walked in, there was a small reception area, and down the hall was one birthing room, with a waiting room at the other end of the hall, about fifteen feet away.  Mike and I went straight to the waiting room, where we found Colleen, Wendy and our friends Erik and Cami, who are two of Rach and Phil’s best friends. 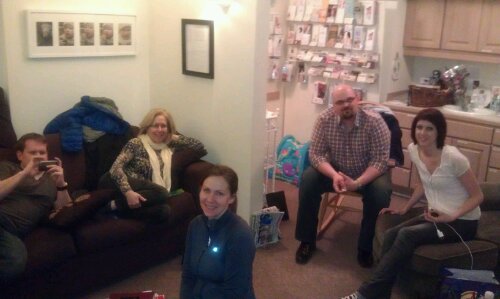 Shortly after we arrived, Rach asked for us to come say hello.  This was the moment when I basically lost my cool.  I don’t know how to describe it, but I had no idea what was on the other side of that birthing room door, and I felt that it was hallowed and frightening and far too personal for me to enter it.  So what did I do?  I followed Mike in there and then stood like a mannequin, unable to speak.  I looked at Rachel, squatted on the floor in a tank top and yoga pants, totally fine and in the moment.  For some reason I just smiled and tried to breathe, because I didn’t have a single thing to say.  Mike was just as flummoxed, standing beside me.  The midwives were gathered around, smiling enormously and waiting for us to stop acting like idiots.  Needless to say, they waited awhile.

Finally we managed to ask how Rach was doing, how she was feeling, but mostly I was staring at the room, picturing all that was about to go down in there.  I saw a main living area with couches and chairs, a queen size bed with lots of blankets, and a huge sunken bathtub in the corner with candles lit around it, and music playing.  It reminded me more of a place to make a baby than to birth one, and then I realized, maybe that’s a good thing.

A couple of hours later, those of us in the waiting room were a little bored, and we knew that boredom leads to hunger, so we went to Trader Joe’s and stocked up on snacks.  Mike and Erik took the opportunity to visit a bar down the street, having a beer in honor of the impending little one.

When the doula recommended that Rachel take a walk outside to get things moving, we all joined her.  I was flat-out gobsmacked when I saw her doing lunges up a staircase, over and over again.  It was 40 degrees outside, she was in labor, and she was taking steps two at a time up and down the stairs.  If ever there was a moment to feel completely pathetic, this was it.  We all made jokes about our physical inadequacies in front of this hero of a woman working out in front of us.  Helpfully, I took photos.

Later on, the waiting room truly lived up to its name.  We had been at the center six hours, and there was no sign that the baby would be coming any time soon.  The six of us had a good time telling stories and making jokes, checking out the crazy names of the birth announcements on the walls, and generally trying to pass the time.  Wendy had a flight to catch back to Spokane at 9PM, but hours earlier had made the decision to move the flight to 11PM so she would not miss the birth.  At 9PM, when there was still no baby, she moved the flight again to the next morning.

Easily the most heart-stopping moment came when we were all sitting in the waiting room and heard the faintest little sound.  We stopped talking for a second and heard it again, this time with total clarity: the sound of a newborn crying.  You would have thought a hurricane came through the room by the speed with which we all fell over ourselves racing out the door and down the hall.  The second we turned the corner, we smacked into Erik, holding his iPhone with the sound of a baby crying coming out of it.  The cacophony of profanity and accusation that hurled toward him in our rage was priceless.  Erik was the master prankster, and it took all of us about twenty minutes to calm down after the false alarm.  It will be many millenia, however, before we forgive him.

At around 10:30PM, the doula came into our room to tell us that Rachel’s water had been broken by the midwife, in order to help move labor forward.  Rachel knew that this would mean she’d be transitioning soon, so she asked for the women to come into the room and pray for her.

This was the most sacred moment of the day — Rachel’s mom, sister, sister-in-love and close friend gathered around her, laying hands on her and praying in the dark and quiet room.  She sat in a chair and cried as we knelt beside her, offering up prayers of thanksgiving, prayers for strength, prayers for comfort, prayers for health, prayers for life.  The midwives stayed in the room while we prayed, and one of them told us afterward that she couldn’t believe what she’d seen, and how it had helped Rachel.

An hour later, the doula told us that Rachel’s labor had stopped progressing, and was actually regressing.  She had made it to 8cm, but was now back at 6cm due to a swollen cervix.  They had to decide whether to continue laboring for an unbearable length of time (and potentially risk needing a c-section), or to transfer to a hospital for desperately needed rest (read: epidural).   It was nearly midnight, so Rach and Phil were headed into their third night without sleep.  Rachel was physically exhausted and said the idea of laboring for several more hours until her cervix dilated was unthinkable.   They made their decision.

And with that, we prepared for the transfer to the hospital.