Moving at the Speed of Light

Cough cough.  It’s a little dusty in here, isn’t it?

Five weeks have come and gone since I hit the “publish” button, and an explanation is in order.

Shocking even ourselves, Mike and I decided to move over the last month.  This decision happened so quickly we could barely catch our bearings, much less document it.  I do not exaggerate (well I do, but not in this case); let the timeline speak for itself: we posted our condo on Craigslist on a Sunday evening, showed the place to potential renters on Monday, offered the place to one renter on Tuesday, and signed papers that Saturday.  On Sunday we toured a townhome to rent (the first place we looked at) and had our application in the next day.  The following Friday we signed papers.

If you remember anything about our previous move, you know that it went nothing like this.  For instance, in our other move we actually discussed it for more than a day before pulling the trigger.  In this case, it was more like tossing a coin in the air and shouting “move!” or “don’t move!” before it hit the ground.

At least that’s how it felt — the takeout pizza version.  The gourmet lobster dinner version is that we’re absolutely sure that this was God showing off all over the place.  He couldn’t be stopped.  He took our one little hopeful dream of being able to rent our condo so we could rent a larger home and save up to eventually buy a house, and threw in ribbon, glitter and ponies.  It was that extravagant.

Which is why we take credit for exactly none of it.  If we’d masterminded this entire ordeal, it would have been an unmitigated disaster.   Instead we just took a risk, prayedprayedprayed, watched closely for confirmations, and then saw it all come together.

Our tenant is a wonderful lady, a woman we are thrilled to have in our home.  Plus she has no pets or kids, which really moved things in her direction.  Our new home is in a location we love (still Kirkland) and has more space and features than we have any right having.  Our first month of rent was free.  Do you see where I’m going with this?  Total show-off territory for Jesus.

Now we are settling in, which based on previous accounts, takes us all of about an evening.  We’ve been in the new home just over a week, and everything is coming together.  It’s very, very odd having more than one bedroom.  It’s even odder having a staircase, and multiple doors that can separate us from each other.

“I’m upstairs, about to take a shower.”

“Do you need something?” he’ll ask.

This is an extremely adjustable problem, and everyone says that soon I’ll have filled the house and won’t be able to imagine our former 860 square feet.  But I never had a problem with our small condo; I loved it.  I miss it, but I am so sure on a cellular level that this is where we are supposed to be.  I’m excited, I’m decorating, I’m cooking, I’m shopping for home goods…it’s very strange when I can feel one phase of my life receding and another stepping forward. It’s even stranger when I like it.

I finally know what the man on the lookout of the Santa Maria meant when he spotted the coast after crossing the Atlantic and shouted:  “Land ho!”

Modern translation:  THANK GOD THERE’S AN END IN SIGHT.  I CAME THIS CLOSE TO KILLING MY CREW.

Therefore, as I made progress on putting the den together, it felt appropriate to yell, “Land ho!” because I could finally see my ship coming in.

As I’ve mentioned before, I am trying to decorate our home so that it appears that actual humans live there.  My every instinct tells me to decorate as classily as possible, to fill the home with tasteful furnishings of modesty and restraint.  My human self, the one with a personality and a sense of humor, tells me to get a sense of style for crying out loud.

So I am pushing myself.  I’m pushing to be a little edgier, a little bit surprising.  When I get nervous or start to question myself, I say nine words aloud,  “You are 26.  You are not 66.  Decorate accordingly.”

With that in mind for the dining room, we decided to add two end chairs that are a departure from the rest of the chairs.  We wanted something to add punch and formality to the space, so we went with two white, full-covered high-backed chairs.  They grab at the white in the baseboards and chandelier and keep the room from being too dark.

Mike has always said that our home is dead if it doesn’t have anything living inside it.  I have repeatedly told him that both he and I are fully operational, living beings, but he still insisted on getting a houseplant.  So while at Ikea, we grabbed a leafy palm that serves as the third living thing in our home.  I told him I am creeped out by the thought of plants bringing bugs as their moving buddies.  I’m convinced that having one houseplant means all the bugs in the world will try to make their home in ours.  I turned out to be right; the plant is now on our patio.

A word about Ikea.  While Mike and I shudder sometimes thinking about the place (I think Fight Club did that for all of us, did it not?), we also can’t deny that it is unmatched in its ability to provide fantastic style at jaw-dropping prices.  Do we decorate entirely in Ikea?  Of course not.  Take our dining room — the table is from Dania, which is much more high-end and better quality than Ikea.  However, we decided to go with Ikea for the chairs since they matched Dania’s exactly but were half the price.  We realize that anything bought from Ikea has a shelf-life of about 3 years max, but we’re OK with that for now. 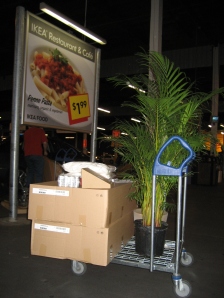 Only in Ikea do you have your furniture and a houseplant on a hand cart with a picture of Swedish meatballs in the background for $1.99.  But I digress.

Brace yourself…the den.  Before I reveal this, allow me to repeat my favorite nine words, “You are 26.  You are not 66. Decorate accordingly.”  We went Bold with a capital B on this design, and I am absolutely thrilled with the look.

We chose a shocking wallpaper from Daly’s to cover one wall, to give the room pizazz.  We put extra money toward the wallpaper because we wanted a high-quality, pre-glued paper with a dynamo black-and-white design.  It was totally worth the expense to get something better than Home Depot.  It was also totally worth the expense because we got a built-in stress-test for our marriage.

“Stop pulling on the bottom, it’s going to tear!”

“Is your side aligned?  Mine’s aligned.  Is YOURS aligned?”

Please refer to the first paragraph about the killing of the crew.

Since the wallpaper has a traditional print (very 19th century), I found a beautiful lamp to add softer lighting and texture.  We still need to buy a new desk and other shelving/filing unit.   But it’s taking shape.

In the living room, as I’ve said before, it was like the walls were begging for fig leaves just to cover their extreme nakedness.  I finally found something both warm and eclectic, and I’m really happy with how it looks against the chocolate-colored fireplace.  Instead of hanging it as instructed (either vertically or horizontally), we hung it at an angle to create interest. 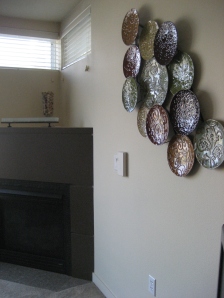 I spiced up the couch with a punch of red and a touch of pattern.  It might just be me, but it looks like a completely new couch:

I think I am done until summer time, at least, because Mike’s aorta might burst if I ask for one more extension on the decorating budget.

I’ve always assumed that I have great taste, that picking out paint and a decent piece of furniture would be as natural to me as choosing something appetizing to eat.

It turns out that I can make a previously established space better, but when handed a blank slate I can only think of one statement and one question:  I want to cry.  Would the fetal position be too dramatic?

Perhaps it is this exact reaction that caused the previous owner of our home to do absolutely nothing with the place.  When we took over there was not one speck of paint, not one modification or change from the way the home was built.  It was just endless walls of cream.  In fact, in the three years she owned it, she only lived it in for one and a half years and then it sat empty.  Perhaps she just couldn’t face her own design failure. 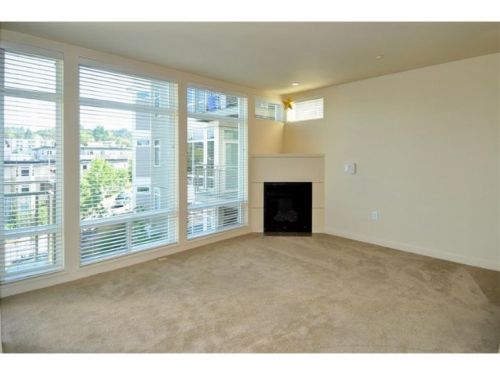 So much white.  I can’t explain the gold star, either.  Perhaps it was a realtor’s attempt to distract from the white-ness of it all.

A year and a half she went to sleep looking at these blank walls.

Before we even moved one piece of furniture in, we painted.  We couldn’t stand the thought of setting up residence with Mr. White-Bread Walls and his wife Mrs. Milk Carton Carpet.

So we painted the fireplace: instant warmth.

We splashed a rusty, reddish brown onto one wall in the entry way to help people make the right choice when they are deciding, “DO I want to come in?” 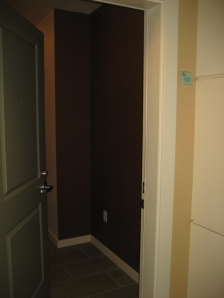 Finally, after literally nine swatches were painted on the wall for comparison, we painted the dining room.  This is where my commitment-phobia caused Mike to want to have me committed.  Nine swatches?  Of course.  It has to be the right green, after all. 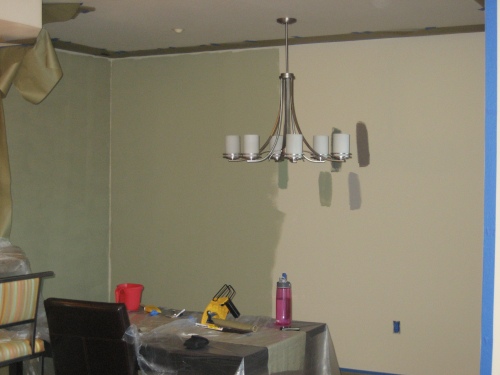 Hello, gorgeous green.  Thank you for giving my guests back their appetite. 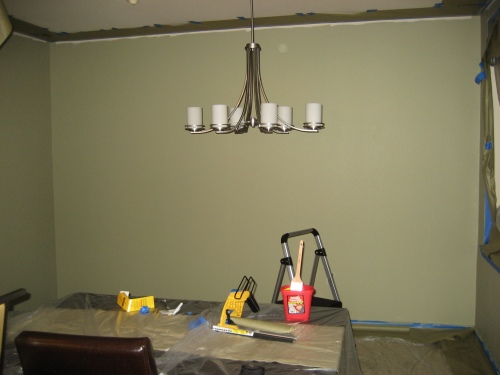 After those victories, everything came to a screeching halt.  Christmas, New Years, this excuse, that excuse…and now we’re facing The Den.  The den of wolves.  The den that threatens to be my undoing.

I am the type of person who only wants two choices.  I can (nearly) always make a two-choice decision; anything more than that and I’m immobilized.  For instance, when I’m at the grocery store and I see seventeen brands of toilet paper, the person on the intercom has to call out, “Clean up on aisle four.  We’ve got a commitment-phobe down.  I repeat, commitment-phobe down.”   They always come running with defibrillators.

So here is The Den now:

It’s acting as storage until we make it into a workable space.  And the white, orb-like cone plugged into the wall?  That’s a vacuum cleaner my sweet mother-in-law gave us that I use far more than I ever thought I would.

The idea is for this to be my writing room; the place where my creativity flows and words spill out of my fingertips.

It’s also where I’ll pay the bills.  But that’s not as glamorous as creativity.

I’m dreaming of taking everything out, wallpapering one wall, hanging a cool chandelier, adding an extra chair and an attractive houseplant to liven the place.

But that’s where you come in.  Send me your ideas.  Give me your insight.  Tell me your genius design plan.  I promise to put it all to work and show you the results in a future post.

We’ll see what works, what doesn’t, and what causes me an anxiety attack.  Mostly, we’ll just see if the medics can restart my heart in time for me to make a decision.

"In good writing, WORDS BECOME ONE with things."
Blog at WordPress.com.