Creating a nursery for twins is a unique challenge made even trickier when the babies are opposite sexes.  We waited until we found out the babies were a girl and a boy before designing their nursery, and we quickly nixed the idea of trying to make the room half pink and half blue.  It sounded like some sort of mish-mash nightmare.

After a little time on Pinterest, I decided the best approach would be a really clean, modern nursery, because of the need for two cribs (and double the clothes) and the fact that the room was fairly small.

Here is a picture of the room when it was a rarely used guest bedroom:

The furniture, thanks to my in-loves, was gorgeous, but oversized for the space, and the color on the walls was a garish Seahawks green.  Incredibly, this room was used as a nursery for twin boys by the previous tenants, which is the only reason we can assume it was painted such a color (the photo doesn’t capture the brightness adequately).

I am not a designer by any means, and am often paralyzed when it comes to decorating, but I put my heart into making a room for the babies that conveys my love for them.  It really was a joy to create.

I enlisted the help of my friend Meredith, who works as an interior designer, to map out a floor plan that would allow for two cribs, one changing table, and a rocking chair.  I sent her the measurements of the room and the furniture we thought we were going to purchase and she created a floor plan to make it fit.

We purchased the paint (no VOC for baby breathing safety) and he painted the entire room white, including the ceiling, because we needed a fresh canvas.  Then he, our dear friend Greg, and my father-in-love taped the walls with precision to ensure our stripes were going to be crisp and perfectly even.  They did a fabulous job.

Our color scheme was yellow, gray and white.  Gender neutral, baby friendly, and just happy.  I wanted a really happy room for the babies, and I think we nailed it.

We chose simple, modern cribs in a soft gray color to contrast the bright wall and yellow and white chevron rug.  They are from Wal-Mart, if you can believe it, and are highly rated and made from sustainable, non-toxic pine wood.  After hours of searching, they were the best cribs at the best price — and they look exactly how I’d hoped.

After an extensive search, I found the rocking chair from a company called NurseryWorks, as it was the only rocking chair I could find that wasn’t frumpy, old-fashioned, or incredibly 90’s (think gliders with bad fabric).  I could see using this chair in other areas of our home after we no longer need a nursery (but let’s not get ahead of ourselves as the thought of that makes this pregnant woman want to cry already). 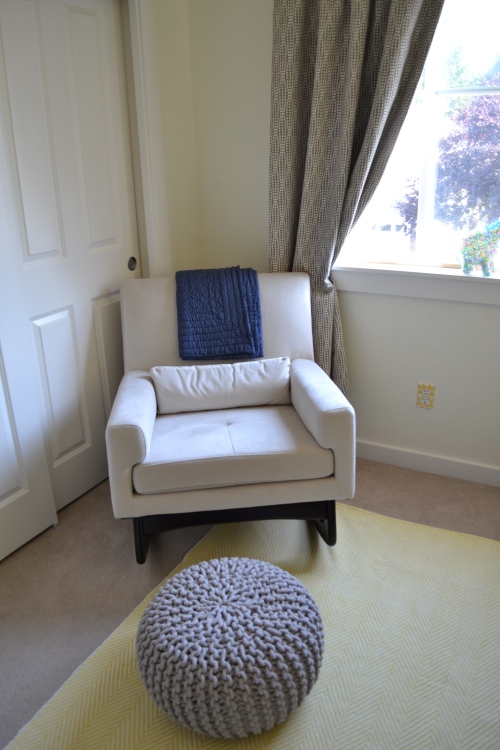 The curtains were generously handmade by Meredith, who is phenomenally talented at sewing.  She even added a layer of blackout fabric to the curtains so I can get the room as dark as possible for naps.  She brought several gray swatches and we chose a shade that matched the cribs, but had lots of white detail to keep the room from becoming too dark.

The little pouf is from Restoration Hardware Baby and Child and is one of my favorite parts of the room.  It’s both whimsical and highly practical as a footrest while sitting in the rocker.

My mom gave us these adorable switch plates for the outlets that she found on Etsy; it’s hard to see here, but they have giraffes and elephants on them.

And there’s a Jonathan Adler ceramic giraffe nightlight: to die for. 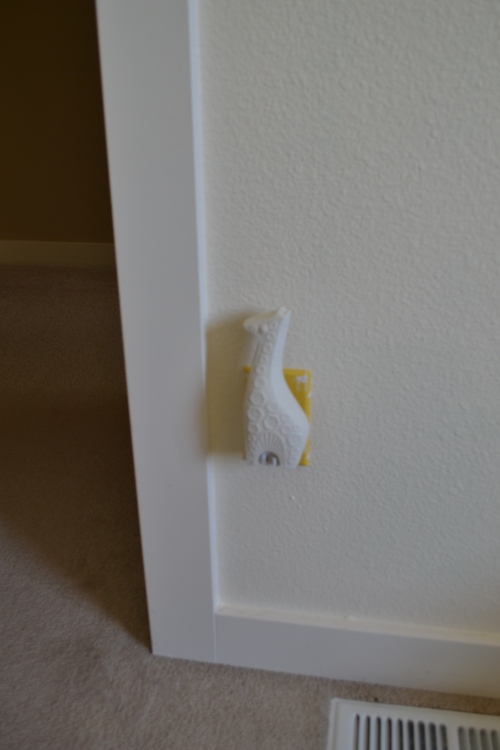 We found the changing table on Craigslist, and I’d still like to swap out the knobs on the doors for something a little more substantial.  We’ll see if I get to that in the next couple of days before the babies arrive.  If not, I don’t think they’ll mind.

I loved organizing the changing table supplies — little bins with diapers lined up, a bin with diaper cream, ointment, etc, and tons of wipes.  The cabinet underneath has all the backup supplies and refills.  It also has a healthy stock of something I’m super excited about: cloth diapers.  YES — I am going to try to cloth diaper the babies.  A fellow twin mom from EMOMs gave me hers which is why I have the confidence to go for it; she did it without a problem, and she saved me about $600 by giving me hers (they’re $25 a piece).  Proof I’m not insane: we are not starting the cloth diapers until after at least a month (Mike maintains he’s not doing it at all, but we’ll see who wins that battle of the wills). 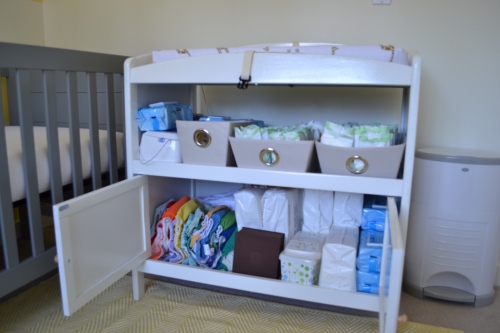 I love the giraffe changing pad cover.  Giraffes are my animal association, meaning they’re the animal I most resemble.  I also happen to like them more than any other animal, which helps.

Please note the space-age camera mounted to the wall.  This takes baby monitoring to an entirely obsessive level, but it’s a level this new mom needs.  We can watch the babies sleep on our iPad and can move the camera by touching the screen.  It’s super Jetsons, and we owe Rach and Phil for the idea — they’ve been using theirs for over a year with Lillian.

My sister, Sam, graciously made the framed artwork of animals from an idea she found on Pinterest.  Each animal is made up of the letters that spell its name.  My in-loves gave us the beautiful gray piece of art that uses the alphabet to make a little poem about how much we love the babies.

You may be wondering where all of their clothes are hiding since we don’t have a dresser.  That was intentional, due to the size of the room.  Instead, I bought a unit with pink and blue drawers to keep inside the closet to organize all of their clothes.  There’s a drawer each for jammies, sleepsacks, socks, hats, onesies, etc., and open cubbies for swaddle blankets and burp cloths.

The hanging storage on top keeps their day-to-day outfits, since I think it’s impractical to fold or hang tiny baby clothes when I’ll be doing laundry so frequently.  This way I can just tuck them into their cubbies (based on size of clothes) and grab what I need.

The two bins on the shelf hold all of their carriers (Mobys, Ergos, Baby Bjorns) and the Boppy is stored up there as well.

The other side of the closet has their hamper and a few hanging outfits, as well as hanging storage for clothes that are six months and beyond.  Up top, it also has the enormous My Breast Friend for Twins.

Confession: I often sit in the rocking chair and picture what it will be like when the babies are in their cribs, or in my arms.  It’s such a delightful room, so full of the hope and anticipation of babies on the way.

Now there’s only two things the room is missing:  the babies! 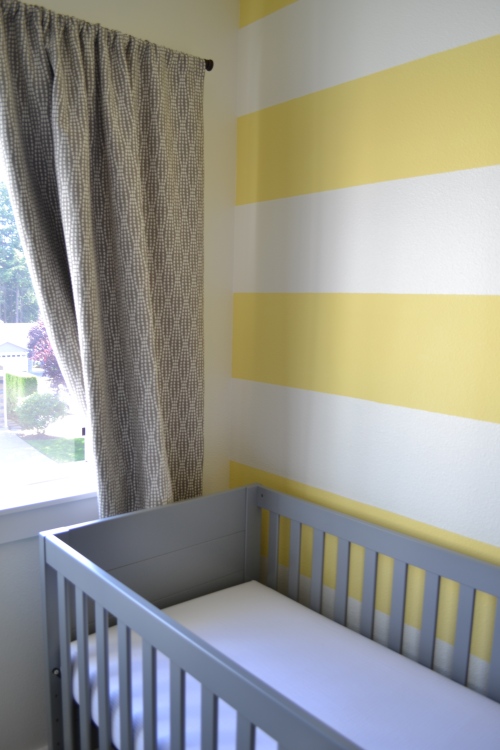 7 responses to “The Nursery Reveal!”