Not Your Mother’s Maternity Muumuu

Maternity clothes have progressed mightily in the last thirty years, and those currently pregnant among us are deeply grateful.  Gone are the days of large floral smocks disguising not just a bump but one’s entire body.  No more are women roaming their homes in oversize overalls.

Instead, figure-hugging clothes are the norm, and bump-accentuation is the standard.  This comes with the added bonus of allowing pregnant women to look approximately thirty pounds lighter.

Once pregnant, I knew right away what I wanted my maternity clothes to look like, and more importantly, what I didn’t want them to look like.  I didn’t want my style to change along with my body.  If I didn’t wear ruffles and bows before, I was not going to wear them now just because I became a party of three.

With that in mind, I hit the stores.

“Stores” is a loose term here, because there really aren’t any.  Online shopping is an absolute must for maternity wear, and that’s because very few stores exist for preggos, and those that do have a tiny section in the back corner that make you feel like you’re shopping for illicit sex toys rather than garments for your widening girth.

My mom and I went downtown to scope the scene around my 14th week of pregnancy, before I really needed any maternity clothes.  We wanted to get ahead of the game so when it came time I wouldn’t be frantically shopping in an ill-fitting shirt.   Our first stop, naturally, was A Pea in the Pod.

This was an excellent first choice because of the service and selection.  The saleswoman congratulated me and started showing me great starter pieces.  We got shirts that are absolutely fantastic because of the fabric — the stretchiest I have ever encountered, and also the longest.  The magic of these shirts is that they spring back into their original shape, which looks like a non-maternity shirt, perfect for post-pregnancy wear.  They’re more expensive than other options ($45), but look infinitely better and will last far longer.

They had perfect preggo leggings, similar to the shirts in that they could be worn postpartum.  Just fold the elastic panel down around your hips and you’re good to go.  Again, slightly more expensive ($45) than getting your leggings elsewhere, but fantastic quality.

Easily the best part about A Pea in the Pod was the changing room.  Each room came with two or three prosthetic baby bumps labeled by month, so you could try clothes on and see how you would look when further along in your pregnancy.

This was a good time.

I strapped on the nine-month bump because, as the saleswoman reminded me, “That’s only like 7 months for you,” pulled on my new clothes and popped out of that room nearly giving my mother a heart attack.

Just for kicks, let’s compare that picture of the fake 9 month bump with my actual 7 month bump, to see if the saleslady was correct: 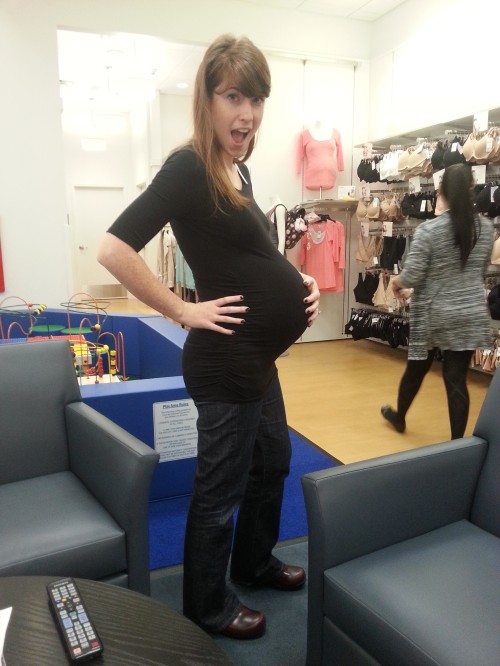 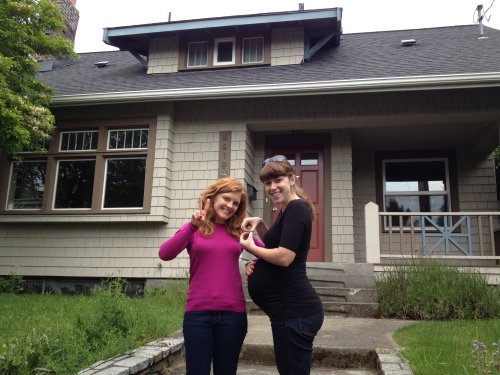 Apparently she knew what she was talking about.

The strange thing about A Pea in the Pod is that they combined forces with Destination Maternity.  Destination Maternity is like Old Navy to Banana Republic — same owner, entirely different approach.  We went to the Destination Maternity portion of the store because we love a good deal, but we were quickly confronted not with good deals, but really lousy clothes.  All of the fabrics were rough and cheap, and the cuts of the clothes were not flattering.  Instead of form-fitted, they were boxy.  It was as if they had taken all their regular clothes, made them four sizes larger, and relabeled them as maternity wear.

Even though we didn’t go cheap, we weren’t about to shell out $200 for maternity jeans either.  To be fair, I am usually willing to shell out about that much for jeans, but that’s because I’ll wear them for years.  I’m not going to spend that on jeans that I will wear for 5 months, and maybe not even that because June and July are not pleasant jean-wearing months.  So we skipped on A Pea in the Pod jeans and headed to the Gap.

This is where we encountered the maternity shame.  We asked the clerk where the maternity section was and she pointed us to the top floor, behind the children’s clothes.  She wasn’t kidding — the preggo-wear was tucked in a back corner, with about four racks of clothing and a wall of jeans.  Luckily, the jeans were fantastic.  They fit like a dream and were $60, marked down to $35.  I will say the prosthetic baby bumps in the Gap dressing room were a joke compared to the ones at A Pea in the Pod — they were like stuffing a pillow under your shirt, but at least they tried.  I got a pair of skinnies (ironic, no?) and a bootleg cut.  I grabbed a couple of tops and practically danced out of the store with maternity-wear glee.

Skinny maternity jeans from the Gap at 21 weeks: 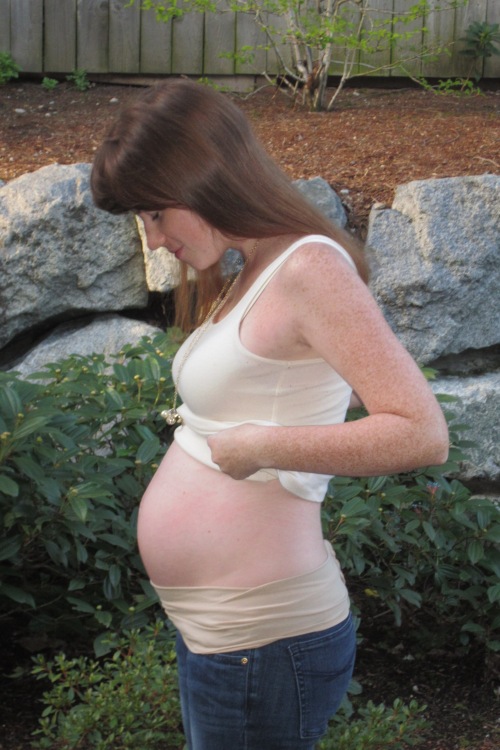 The rest of the purchasing I did online, since there weren’t many other stores to choose from.  I ordered several more tops and dresses from A Pea in the Pod and Gap, most of which worked, some of which I had to return.  The real dark horse in this story?  Old Navy maternity.  Total shocker.  My sister sent me a link to their website one day because they had a screaming 40% off sale, so I thought I had nothing to lose.  I ordered a bunch of items that seemed foolproof and was astonished at not having to return a single item.  Each one fit perfectly and was flattering…and inexpensive. 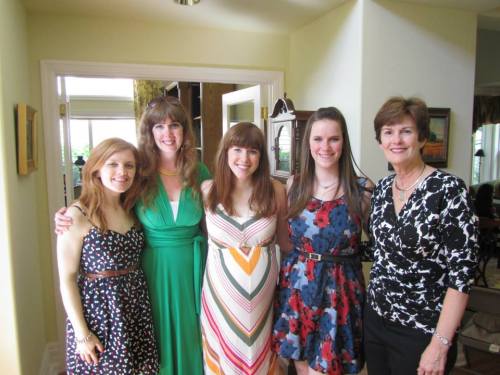 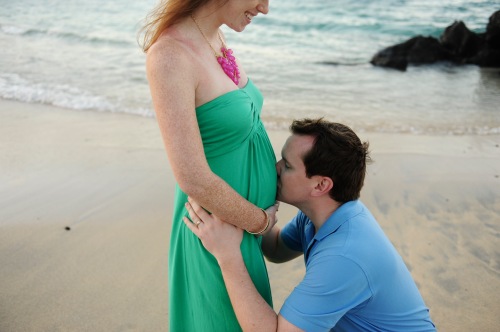 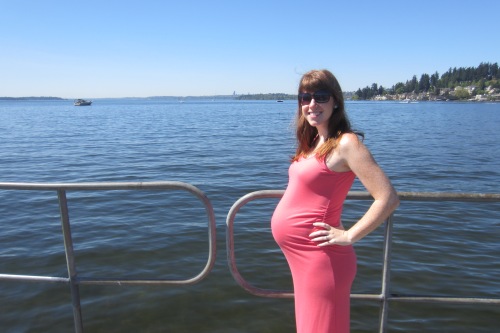 Knee-length eyelet dress (with my mamas at a shower — note their expert twin grandma-to-be attire of blue and pink, which was totally unintentional): 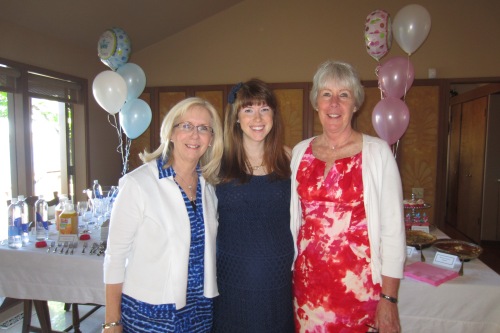 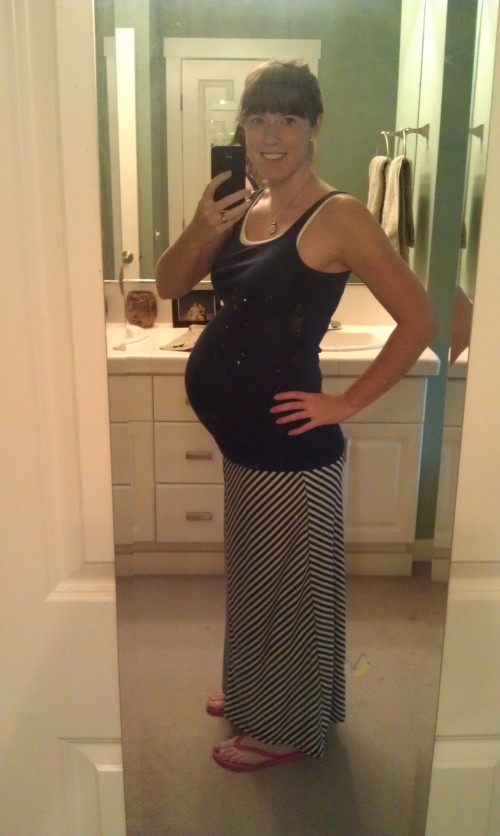 The main piece I would recommend as an absolute must-have for any pregnant woman: Old Navy’s maternity tank top.  Absolutely perfect: softest, longest, stretchiest, totally wearable post-pregnancy.  And at $12, you can buy one of every color.  I wear them under everything, and all summer I’ve been pairing them with skirts, jeans, leggings, as pj’s — they are my go-to. 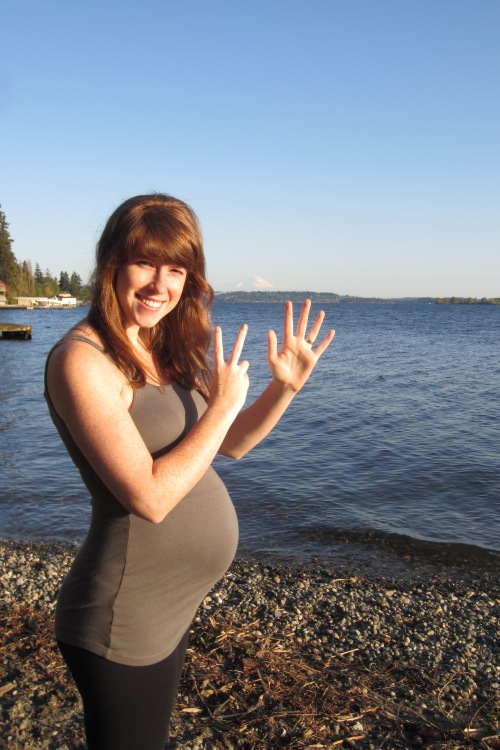 Some pieces end up having to switch gears partway through pregnancy.  Take my striped dress from A Pea in the Pod.  It started as a dress which I wore at Annie’s wedding rehearsal at 17 weeks pregnant: 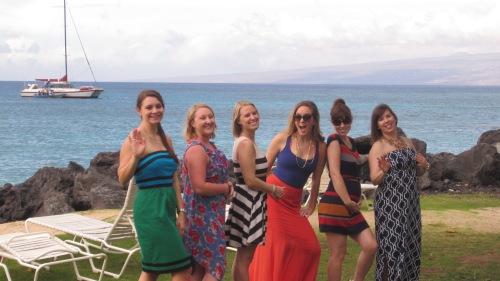 And four weeks later I wore it as a tunic with leggings at our gender reveal party, because wearing it as a dress at that point would have given people a view privy only to my OB: Now that I’m 36 weeks along, my options are more limited.  Regular pregnancy clothes really aren’t made for twin pregnancies, so I’m walking into my closet each morning choosing between forgiving maternity dresses and leggings with tank tops.  Those are pretty much the options these days.  No more jeans.  No more body-hugging pieces.

And that’s OK, my friends, because the countdown to the birth is on, and soon the only thing I’ll be wearing is a hospital gown.

9 responses to “Not Your Mother’s Maternity Muumuu”