My friends Katie and Jimmy have the most romantic love story, and I just have to share it.

After graduating from university a couple of years prior, Katie was hard at work as an occupational therapist, helping people who’d had strokes or severe accidents rehabilitate their lives.  She was doing exactly what she’d gone to school for, was making great money, and would be considered a success by any account.

One problem:  she was incredibly bored.

Despite the success in her career, she knew she was missing an essential element of life — adventure.  She was single, had never traveled overseas, and suddenly felt an intense need to abandon her current life and explore the world.

She grabbed her friend Eileen and booked a trip to Ireland, taking three weeks off of work.

Since this was her first time abroad and she had absolutely no idea how to get around, she and Eileen booked a tour, something like Rick Steves would host: the bus, the sights, the strangers.

Ah, the strangers.  Katie wasn’t one to gab with every person she met, but three weeks with just Eileen would be a long three weeks indeed, so she chatted with the fellow tourists from time to time.

One man in particular felt the need to give Katie some advice.  His name was O.B., and he was an adorable elderly man who worked as a judge in the States. She told him about her big adventure and how she didn’t want to return home to her occupational therapy job.  She wasn’t ready to settle down yet.

“Why don’t you head to Sun Valley, Idaho?” he asked her.  “Gorgeous ski resort.  Plenty of work.  Head there for a few months just to get through winter and then you can see how you feel.”

Katie listened to his idea, but quickly dismissed it.  She’d never even been to Idaho.

Upon returning to the States, Katie reconsidered Sun Valley.  She didn’t want to return to work, so she quit her job.  She asked a friend to join her for a winter in Idaho, and they jumped in the car headed west.

Sun Valley turned out to be a bigger adventure than Ireland.  She got a job working in a restaurant at the top of the mountain, but after a month of 25 degree mornings riding a chairlift up a mountain plus falling from that chairlift once, she quickly realized she needed a job that didn’t involve upper-mountain transportation.  She soon started work at a single-lane bowling alley.  It would seem that luck was not on her side, as even though she made it through a chairlift fall, a chubby 12-year-old boy skiing out of control crashed into her — breaking her back.  She then worked at the bowling alley on crutches.

But it didn’t stop her social life.  She was going on three dates a week with fun men she met.  She met celebrities who were in town to ski.  She was having the time of her life.

After those three winter months passed, she was convinced this was where she was supposed to be and told her friend she wouldn’t be returning with her.  Her friend needed the job she had left, so she headed back alone.

He got a job at a catering company, pulling double-shifts and working late hours to make rent and have some beer money.  He had a blast for a year.  He dated, but he didn’t meet the girl for him.

Not long after Katie decided to stay in Sun Valley, some mutual friends suggested to her that she meet Jimmy.

“Have you met my buddy Jimmy?” one asked her.

“Jimmy who?” she replied.  It was a small resort town, after all.

“Jimmy Carter,” he answered with a straight face.

Jimmy claims that the moment he first kissed Katie on a street corner after a date, he knew without a doubt that she was the one.

I am that second baby girl.  You see, I lied, a little bit.  This isn’t the story of my friends Katie and Jimmy.  It’s the story of my parents, Alyson and Warren.  And 30 years ago today, they promised to stay together for as long as they both shall live.  I think they’re well on their way, wouldn’t you agree? 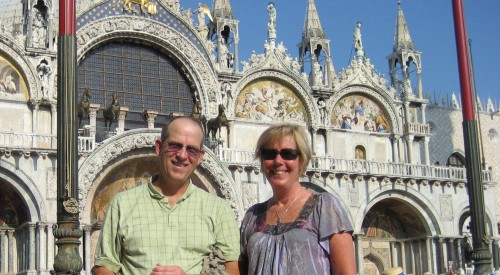 (Here they are in Venice in summer 2009.  PS – for those of you too young to know, Warren Burger was the US Chief Justice when my parents met, which is why my mom thought my father’s name was a joke.)

Filed under The WORD (Faith)