Yesterday I was at Trader Joe’s for my weekly grocery run, and as I waited in the checkout line I looked out the door to the parking lot.  It had been lightly sprinkling when I’d come in, but now it was a colossal downpour rarely seen in Seattle.  I looked down at my clothes: no raincoat.  Earlier that morning, like an idiot, I’d told myself “April showers, May flowers…who needs a raincoat?”

After paying, I pushed my cart outside and stood under the awning.  I took one step out from under it and was splattered in drenching rain.  I jumped back and spent thirty seconds debating how long would be too long to wait for the rain to pass, but decided that was a truly pathetic response for a nearly fifteen-year Seattleite.  In order to reduce the soak, I visualized my approach like a sprinter pictures crossing the finish line — I’d unlock the doors, grab both grocery bags, open the door, toss both bags inside, and then hurry back to return the cart.

It was all planned.  What’s that they say about the best-laid plans?

I dashed along the sidewalk to my car, which was parked in front of the building, so I didn’t have far to go.  I grabbed the handle of the cloth bag and the handle of the paper bag and stepped off the curb to move toward the car door.  I never saw the cement parking stop that caught both of my feet — I fell so fast I didn’t even realize I’d fallen.  I was standing one moment, and the next I was lying face-first in an inch of water, all of my groceries splayed out before me.  My mind raced to catch up to what was happening, but all I could think was “Why is the puddle red?”  Suddenly I realized a bottle of wine had shattered and was soaking not just the cement but my groceries, too.

“Oh my gosh are you OK?” a woman behind me asked.  She looked truly horrified and stopped to stare.

“I’m fine, I think,” I replied, not knowing which way was up.  “I think I’m fine.”  I finally stood up and tried to triage the situation.  As the rain continued to pour, I couldn’t decide what was most urgent — my cell phone lying face down in water, my leather purse lying on its side in the water, or both bags of groceries which were now soaked through.  It’s incredibly bizarre how the brain functions when it’s in minor shock — all of this seemed to last for forty-five minutes, but actually occurred in about twenty seconds.

I picked up my purse, keys and cell phone and threw them over my shoulder.  I grabbed the cloth bag which wouldn’t break on the bottom, and determined that the groceries inside were mostly OK.  I threw it in the car, splattering a pint of water all over the seat.  I gingerly picked up the shattered glass fragments from the concrete and put them in the disintegrating paper bag with the ruined groceries.  It occurred to me just then that I’d now have to re-shop for all of these items, and the thought of it completely overwhelmed me.

I picked up the bag and carried it inside, in a daze.  I stood in the doorway dripping water from my hair and clothes, and put the bag down on the floor.  I looked around for an employee but couldn’t really get over the fact that I was standing in the middle of a grocery store fighting back tears, and didn’t want anyone to see me at all.  Finally I walked up to the nearest one who had a chipper can-I-help-you look until she turned and saw me and dropped her jaw.

“I need help,” I said feebly, “I fell in the parking lot and need a garbage can for my groceries…” I didn’t finish before she interrupted.

“Oh my gosh, oh you poor dear!  Are you OK?  Are you hurt?” she asked earnestly.

“I’m alright,” I replied, realizing for the first time that my left knee was actually throbbing and my left hand was scraped.  “I picked up the glass because I don’t want someone to get hurt…” I trailed off because she had already picked up my soaking bag and was guiding me toward the other side of the store.

“We’re going to get these replaced for you,” she said matter-of-factly, the idea of which had never even occurred to me.  “Just give me a moment while I see what you have here.”

I bit my lip to keep from crying because her kindness was all it would take to break the dam.  I grabbed a paper towel and started wringing the water out of my hair and off my clothes.  I looked down at my leather boots which were beyond help, and realized I was wearing leggings that should have torn, but were surprisingly intact.

The woman came out of the back room with a piece of paper and a basket and started running around the store filling it up with all of my ruined items.  I was shocked to see this and wanted to trail after her to tell her I could do it, but the odd thing was, I really couldn’t.  If they had thrown away my groceries I know I would have turned around and driven home without the items, because I was still shaking and my knee was aching.  Toss in my humiliated face and soaked clothes and you have someone who is not willing to wander the aisles for food.

I closed my eyes and heaved a major sigh of gratitude that the employees of Trader Joe’s were such angels.  In doing so, I must have looked even worse because a fellow shopper walked by, looked at me, and stopped.

“Arrrrrre you OK?” he asked.  I told him I was fine and mentally noted that however bad I thought I looked, it was probably twice that.

The lady with my groceries came back and said, “I’m so sorry but we’re all out of the ground flax seed you had in your bag, so we’re going to refund you for that.”  The idea that she was inconveniencing me with her lack of flax seed was so laughable that I did just that — I laughed.

I looked down at her name-tag and noted her name – Nancy – so I could write a composed thank you note, as I didn’t have the words to tell her thank you sufficiently.

Another employee walked up to me and handed me the two dollars and change for the flax seed, and then double-bagged my fresh groceries.  Just then Nancy came walking over with a bouquet of flowers, and I caught my breath at their generosity.

“Nancy, I can’t thank you enough.  I really am so embarrassed and I’m so grateful for your help,” I told her.  “The flowers are just above and beyond, I don’t know what to say.”

She instantly saw that I was one word away from bursting into tears, so instead she hugged me.

I walked to the car with my groceries and flowers, amazed at the kindness of strangers.  In the words of Anne Lamott, God was really showing off on this one.

I got in the car and finally cried like I’d wanted to since the moment I fell.  Except these tears weren’t just filled with a bruised knee and ego, they were also filled to overflowing with gratitude. 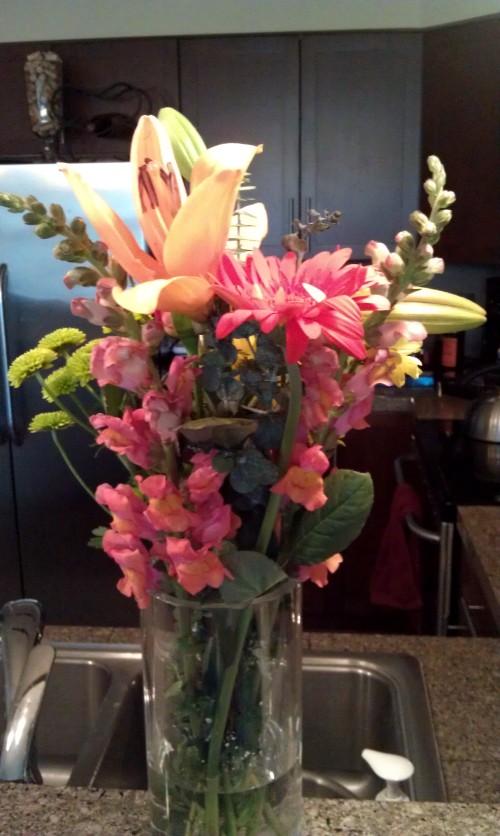 Filed under The WORD (Faith)