Today is Words Become One’s ninth anniversary, so let’s celebrate by getting out of town, shall we?

In January, Mike and I had our ten year anniversary, and his parents generously invited us to join them at their two condos in Cabo San Lucas, Mexico for a week of fun.  We were bringing the kids, so it was a week of fun with the major parenthesis of a boatload of work, but we were determined to make the most of it.

Before I go any further, every mother reading this knows the sweat, angst and gnashing of teeth that goes into packing for one’s children and oneself.  I wrote a separate post about the ins and outs of preparing to travel and traveling with children.  Head there for the details. 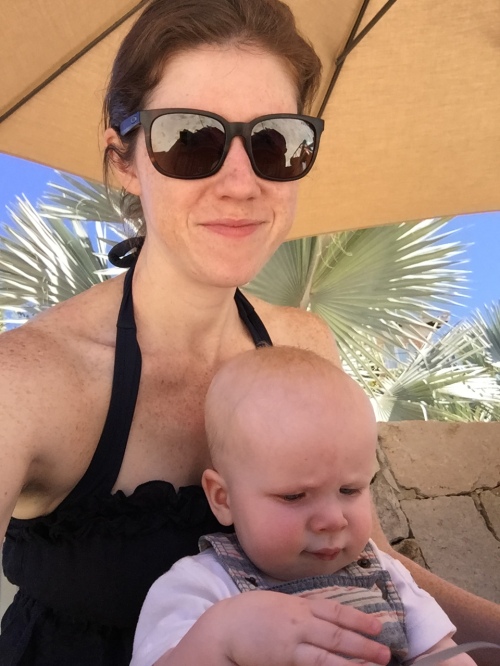 Only if by “just like that” I mean one plane ride, an overstuffed carseatless shuttle, an interminable wait for our rental SUV, a 35 minute drive to the resort, a (wise) rejection of the fourth-floor kids-could-fall condo, and a settling into a wonderful first-floor kids-can’t-fall-from-the-balcony three bedroom condo.  Just like that!

The units themselves were ideal for our bigger family.  A master bedroom with en-suite, two kids bedrooms with their own bathrooms, and a kitchen and living room.  Glenn and Colleen had the same setup right above us, which we loved because it gave them their own space to have peace and quiet and a break from the kiddos.  That and Henry would race up there every morning after getting dressed, usually followed by Hunter and Arden.  Wouldn’t want them having too much peace and quiet, after all!

Nana and Papa brilliantly asked for units next to the children’s pool area — a place with a huge pool, water slide, and in-ground shaded trampoline.  It even had a kids indoor area for artwork and creative play.  We thought it would be unbelievably crowded, and instead no other kids were around.  This must be the result of traveling outside of holidays and spring break.

It was really peaceful, which was the last adjective we expected to employ on our first day. 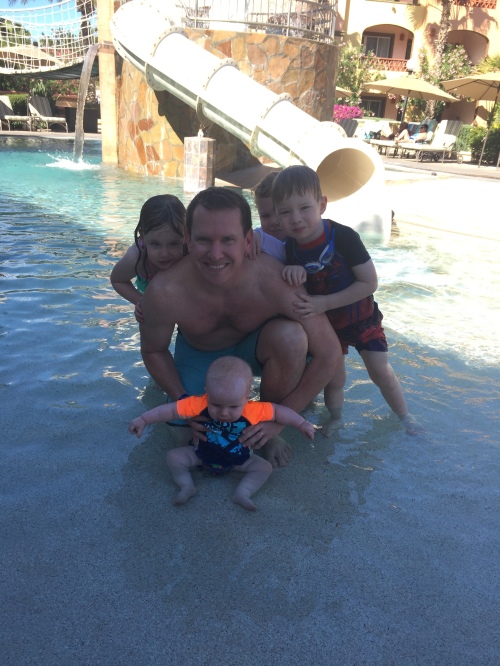 So peaceful in fact, that we promptly shattered the serenity by Hunter slipping and busting open his lip, blood dripping out of his mouth.  Nana and I rushed to attend to him, not realizing Mike had stepped aside to order beverages by the side of the pool.  At the same second Hunter tripped, Mike walked back along the pool edge and saw Henry tiptoe closer to the deep end, his little chin in the air.  He threw the drinks to the side and ran in, scooping him up in one of the scariest moments of his life.  He ran over to us only to realize we never saw a thing — we were still holding paper napkins to the lips of a sobbing Hunter.

We were all devastated that so much could happen in seconds, and it shook the casual relief of our resort arrival into soldier-like attention at every moment.  We’d had several conversations about man-to-man water coverage, but we learned when an accident happens it can pull us away just long enough for disaster.  We were deeply shaken and prayed thanks for protection of both our sweet boys, while vowing to do much better.

After many long breaths in and out…

Not surprisingly, it took the two women on the trip who cook all the food at home no time to adjust either.

I know this picture looks entirely staged, but Henry really was acting 40, unbeknownst to him, and we laughed out loud.

All parents know that “vacationing” with kids is taking a trip — you’re not vacationing from the work involved with caring for kids.  That certainly applied here.  However, we thought one way to make it feel like a vacation would be not going to Costco, meal planning and cooking.  So we opted for the all-inclusive, a first for us.  Considering kids are free, I’m certain we won out on eating and drinking more than the daily price we paid.  That resort didn’t bet on four kids. 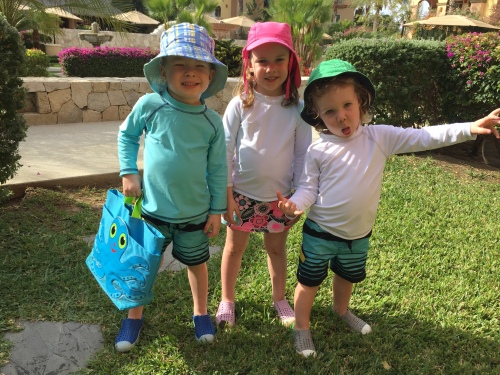 Also this is Hunter’s signature move; he puts both hands into “I love yous” and sticks his tongue out.  Only Hunter could make it look like gang signs.

We made the most of the outnumbered childcare situation by taking ourselves to lunch. 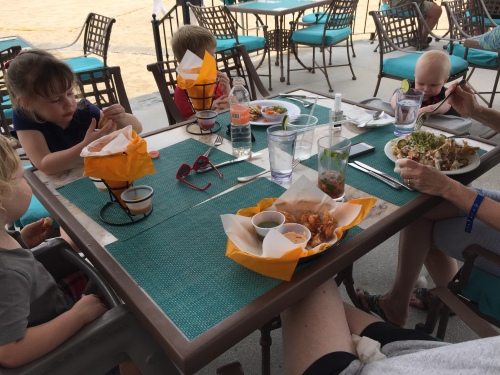 Note my non-non-alcoholic raspberry mojito.  It was necessary because of this:

Do your sons wait for their food this way?  No?  Just us, then?

In the middle of the week we had a day of hard rain.  This is very rare in Cabo. We know because the staff told us twenty-five times.

We asked for ponchos to get through breakfast, which the kids found HI-larious.

Then we headed inside for some art and movies.  Even though kids love non-stop activity, they thrive when the pace changes and they can just chill.  They’re surprisingly like adults that way. 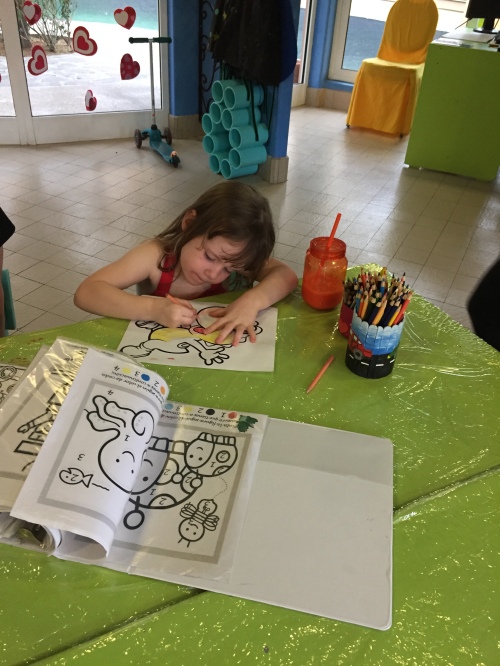 Unquestionably, the best part about the downpour was the golf cart rides from condo to restaurant and back.  The kids were squealing with delight, particularly when it rained so hard they zipped the plastic drapes so we were cocooned inside.

The couple of cloudy days were also vastly improved by hot tubs.

I don’t know how to say this without sounding like a moron, but a few days into the trip I had the following thought: this trip is one hundred percent about the children.  We are doing nothing but entertaining them from sunup to sundown.  It’s just one kid-bliss activity to the next.  I knew this before coming here, but how did I not truly KNOW this?

Mere hours later, Mike came up to me and said, “I know how dumb this sounds, but this trip is entirely for the kids.  Like we are just service vehicles on their parade of fun.  It’s insane.  Is this what our parents felt on every vacation!?”  I smacked him on the arm and yelled “I KNOW!” totally elated that our parental wavelength was still so completely synced.  I wasn’t the only idiot who has been a parent for four and a half years and is still surprised by the parenting commitment being TOTAL. 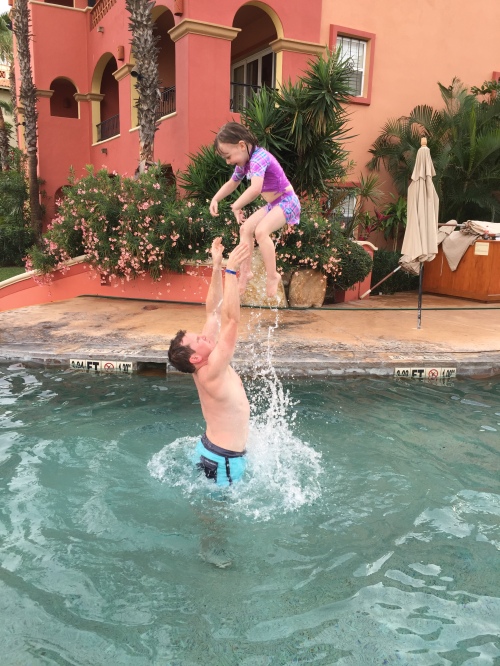 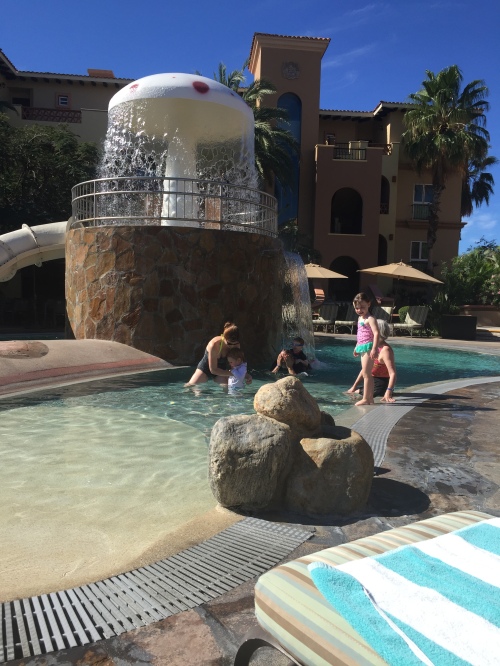 The intense guarding of four kids by the water was nerve-wracking, but we tried to breathe into it by taking turns, ordering beverages, and shuffling them over to the trampoline when our inner lifeguards were wiped.

On our last full day, Mike gave me a break during the kids’ naps to go lay by the pool.  I thought I would burst from the happiness and disbelief of actually being alone poolside, and walking the beach just thanking God for His grace and this stunning beauty. 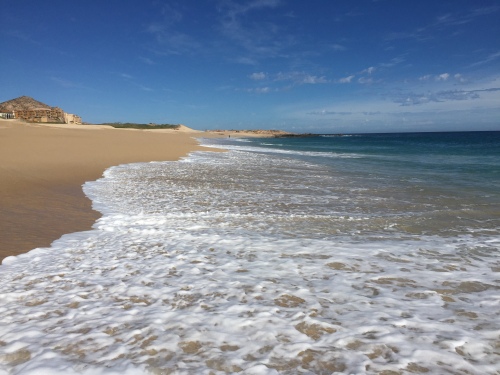 I am not a selfie taker, but exceptions must be made.  I wanted to remember being this giddy. 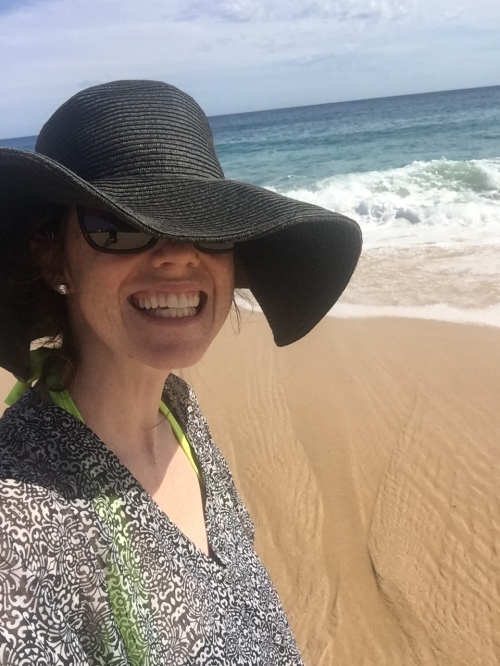 That evening, Glenn and Colleen stayed in and we took the kids down to the beach for a special moment we wanted them to participate in.  We brought our vows to recite them to each other again, just as we have nearly every year, but this time with our own children as our witnesses.  It was pretty surreal and, to the two of us, quite profound. 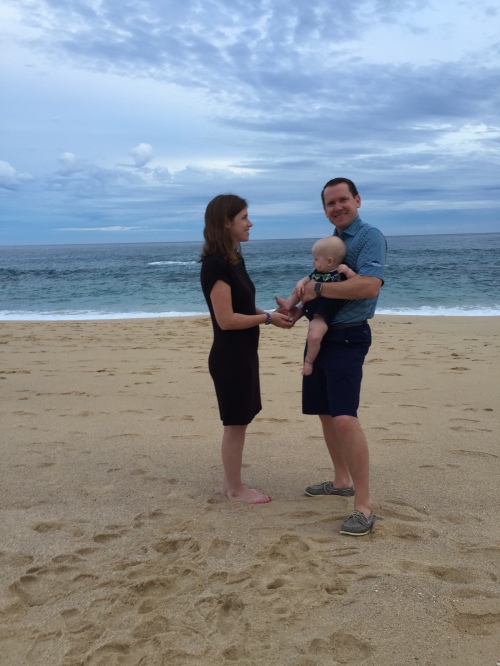 There wasn’t one other person on the beach, so we asked Arden to take our picture while we spoke.  Then we tried to gather the kids together and squeeze for an impossible selfie, but it just wasn’t working.

Right then, a kind-looking, well-dressed man approached, walking around the boulders near the entrance to the beach, and smiled at us.  We were sort of embarrassed he saw us wrangling the kids for a picture.

“I had to come down here,” he said.  “I’ve been watching you from the restaurant and I felt I had to come take your picture for you.”

The restaurant wasn’t adjacent to where we were; it’s a good walk back to the resort and up a flight of stairs.  He had to have left his seat before we even began taking a picture.  I just stared at him, stunned.  Then I told him how incredible it was that he came down because we were just renewing our vows and wanted a photo.

“Wow, really, wow.  You have just the most beautiful family, and it’s just the best thing.  Really, you’re blessed!  I’ll take your picture!”

I beamed at him, totally grateful, absolutely aware that this man was responding to a prompting in his heart, one the Lord nudged him to.  It still brings tears to my eyes.

We handed him our phone and the chicks gathered around and he took our photo.  We thanked him profusely, telling him we couldn’t believe he would leave his dinner at the fanciest restaurant on the property just to take our picture.

“I’m so glad I did,” he replied, smiling at each of the kids.  “I’m thanking you for this.  It’s just so beautiful, your family, thank you so much.”

He smiled sincerely and then turned to walk back up the beach toward his dinner companions.  Mike and I looked at each other, amazed, so sure of the Lord’s presence with us on that beach.

This picture means more to me than I can say.

God wasn’t done showing off, because that night at dinner there was this sunset.

It was heart-stopping.  We just stood there and stared and stared.

Hunter, of course, flashed his signs.

By this point of the vacation, Henry and Arden were over everything.  Nothing was amazing anymore.  They even told me by the fourth day they didn’t want to eat in one more restaurant.  “Not ANOTHER restaurant, Mom!  Not AGAIN!” This from the two people who ask to go to restaurants five times a week.  See those faces above?  Same.  Sunset?  Sigh.  Eyeroll.  Another sunset.

I do the same thing to Jesus all the time.  Another day where my kids are healthy and there’s food on the table and heat in my vents?  Same-sauce, man.  Whatevs!  Observing things like this in my kids is the quickest heart-change.

One of the nights, my in-loves had a lovely date night dinner alone, which they more than earned for putting up with our chaos.  They shared the favor by giving us one to celebrate our anniversary.

This trip could not have happened without them, not nearly — we’d never have attempted it. We’re so grateful they were willing to spend a week on a trip with us, rather than a vacation in peace and leisure like they deserved to.

We had a couple of hiccups and close calls, but really it was such a happy time, full of memories being made by the minute.

Thank you, Mama and Papa-in-love, for such an awesome first vacation/trip adventure.  Twice a day I’m fielding the demand, “I want to go back to Mexico!”  Looks like two people got over their restaurant satiation. 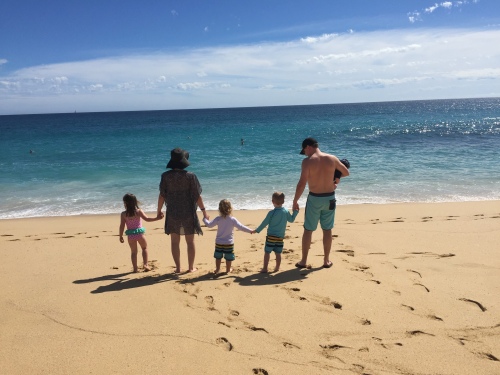