Remember that one time I had a baby and promised I would tell his birth story before he was 21 months old?  You probably don’t, because you have a life, but I do, and it haunts me. Hunter turns 21 months old on February 10, so I’m keeping my promise by the most anorexic of margins.  I originally made that odd-numbered-month promise because that’s how long it took me to write the story of the twins’ birth.

I know procrastination had a starring role, but the other lead actors in my failure to record his birth actually involve his birth: it was an emotional and unexpected series of events, and the drama of circumstances after his birth made me recoil at the thought of writing it all down.  I’m still not sure how much of his post-birth story I’m going to share, because it’s very personal and hard to write about.

Let’s start at the beginning.

Sunday morning, May 10, 2015 was Mother’s Day, and it was also the day we were planning to dedicate Henry and Arden to the Lord in a service at our church.  We had attempted this twice before, both times resulting in illness and missed dedications, so I was determined to make it to church that morning.

I have no memory of what we did that morning.  I am sure Mike made a special Mother’s Day breakfast and tried to let me sleep in, but I was having Braxton Hicks contractions every day by that point (two days shy of my due date) so I probably just waddled around trying to get the kids dressed.

This was the state of my ginormity (taken the previous day at a Mother’s Day celebration at my parents’ house with precious baby Gardner, now two and a half (sob!)): 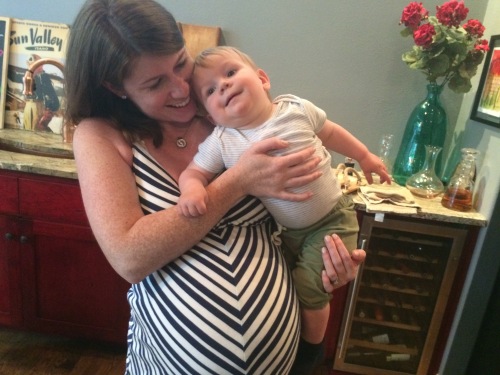 I was standing near the family room at 7:50AM when I felt an odd sensation that drove me to the bathroom.  The second I sat down my water broke.  I knew instantly that was it, and I was amazed my body warned me to reach the toilet.  I called to Mike the phrase all men ache to hear, “Babe………….my water broke.”

He couldn’t believe it because this was a first for us, having been induced with the twins.  I called the doctor’s office and the nurse asked me to sit on the toilet again and wiggle around and see if more fluid came out.  She wanted to ensure I hadn’t mistaken this for peeing.  I was vaguely insulted but did as I was told and said yep, more fluid, lady.  She said “Come on in, you’re in labor.”

Normally this would be music to my ears, but I temporarily lost my mind and said, “You know, we have a dedication this morning with the twins, and would it be okay if we just swung by there on our way and took care of that and then came in?”  She was like, um, no.

Which is funny, because it’s also what Mike said when I posed the same question.

We called my parents to come over to watch Henry and Arden, and then I started packing up last minute items and Mike ran around getting everything ready to go.  I started laboring immediately, surprising both of us, and had to stop every couple of minutes to breathe through contractions.  I couldn’t believe how fast it was happening, and I was so excited to be in labor naturally.

I stopped in Henry and Arden’s room to say goodbye to them, and felt my throat tighten and my eyes burn as I hugged them goodbye.  I felt I was saying goodbye to us, to the Fab Four, to the era of my life when it was just us and the twins.  My mom could see the emotion rising and said, “They’re fine, you don’t have time for this, you’re in labor, GO.”  So I heaved myself up and walked out the door.

As a reminder, these little babies were who I was saying goodbye to.

It’s shocking to look at them now and think that I was having a baby with twins at this age.  At the time I knew everyone around me was deeply concerned for my sanity at having a baby when the twins were so young, but I couldn’t see it then — they looked like big toddlers to me.  Probably because it felt like it took so long to get them to this point, they just seemed older to me than to everyone else.  And now I look at this photo and can’t believe what babies they were.

Once we checked into the hospital, the nurse took us to one of those super private triage areas where you’re separated from the other laboring moms by nothing but a curtain.  We could hear what sounded like a man making deeply disturbing moans, and of course it couldn’t have been a man in the maternity ward, but I kept saying to Mike, “What IS that?!  Do we have to listen to that?!”  And then I’d contract and wouldn’t care again for another sixty seconds.

The nurse was a little, shall we say…huffy.  That’s probably the only word.  I am an open communicator, particularly when I’m engaged in something as enormous and rare as giving birth, and she seemed indignant that I would ask so many questions; she took it as a personal offense like I didn’t trust her.  So we were on rocky territory right from the start.

I’d been laboring hard and in significant enough pain that I told Mike I was sure I was more than five centimeters.  She checked me and announced I was three, and I was completely aghast.  I told her that was impossible, and that I knew through my prior birth experience that my cervix was tricky to measure, which she accepted with an eye roll and a threat to do a balloon to try to open my cervix.

I asked if my doctor could check and this did not please her at all, but she called him.  He came in very shortly (it was 10AM now) and after checking, announced I was at six centimeters.  Triple victory!  Far along!  No balloon!  And most importantly, in-your-face Nurse Huffy!

We proceeded to the delivery room and I labored in all the ways one does — on a ball, standing, holding Mike’s shoulders and leaning, walking around, the works.  Each contraction approached like a bell curve, slow to start, peaking, then slowing backing away.  I told Mike this was night-and-day different from laboring on Pitocin during my induction with the twins.  It was drastically easier to manage, way less pain, and I could totally cope.  I had to admit it became progressively more painful, and I must have expressed as much because he started to ask me to order the epidural.

I told him I was fine, and I wanted to see how far I could go, and I did for another half hour or so, but then things became much more intense and I told the nurse I was ready for help.  She called the anesthesiologist and reported back to me that the one on-site was in a c-section and she’d paged someone on call.

“Well it’s the weekend,” she replied, like that made any sense.

I knew I was crossing into the ugly side of my personality, but I was in labor and didn’t care.  “Oh, because women only have babies Monday through Friday?  Incredibly logical.”

Just before the glorious anesthesiologist arrived at 11:40AM, they checked me again and I was at eight centimeters, which made me feel like superwoman.  I had only made it to four with the twins before needing help, and though there is no shame in that, Competitive Abby wanted to better her score.  You know, for those non-existent awards handed out at the end of each delivery.

The drugs worked like a dream and I took a little nap from 12:30 to 1:30PM.  My mom had arrived by this point and she and Mike hung out while I dozed in medicated bliss.

At 3PM they checked me again and I was a full ten, ready to rock.  And so the pushing began.  My old friend!  Oh wait, my foe.  I always mix those two up.