The Chicken, the Whole Chicken and Nothing but the Chicken, so Help Me…

Let me be clear: I have an aversion to chicken.

It dates back to my childhood years of poking my meat with a fork to check for veins or other signs that my entree used to be a live animal.

I wish I was past this.  I wish I didn’t care that there are things in chicken like fat and “gristle” (a word that still makes me shudder).  Mostly I just wish I was a vegetarian.

But then I couldn’t have steak or fish, both things for which I salivate.

So.  The chicken.  I deal with it on a semi-weekly basis because it’s easy, cheap and the husband enjoys it.   I usually just cut it up and cook it with some simmer sauce.  But do I like it?  Unclear.

Recently I’ve been flipping through various cookbooks and the same recipe keeps jumping out at me: whole roasted chicken.  Every single recipe taunts me with how easy it is, how low-maintenance, but they all seem to forget one little tidbit:  I have to TOUCH the chicken to make it.

So, without actually touching it, I managed to get this 4.5lb chicken from its packaging to my chicken-only cutting board.

Ten minutes later, the chicken still looked like this, because I was pacing back and forth in front of it after reading the following in my cookbook: “Remove organs from cavity of chicken.”

Surely there must be some other way.

I finally decided that without rubber gloves I was going to have to resort to using a paper towel.  I wrapped my hand in the paper towel and stuck my hand into the “cavity.”   It only took about two seconds for me to realize that I could not feel a thing, nor could I move my hand to grab at anything.

I was going to have to do this the hard way.

I took off the paper towel, counted to three and dove my hand in so fast I convinced myself I wouldn’t feel a thing.  But I did feel a thing.  His organs.  How do people do this?!

I promptly threw them in the trash and then washed my hands within an inch of their life.  Only I should have kept reading because it wasn’t long before I was rubbing salt and pepper all over the bad bird and then shoving a lemon up his rear.   Good times.

I became a huge fan of rosemary in the process, because I quickly discovered that I can jam it into the chicken without ever touching the slimy flesh. 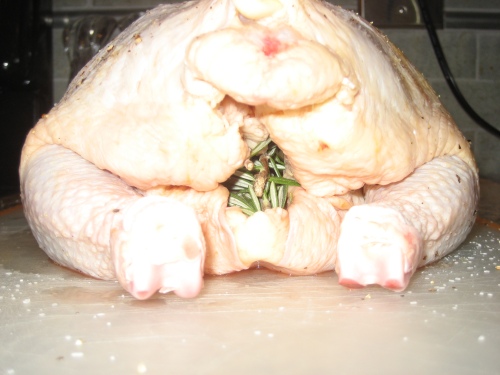 My jaw really hit the floor when the cruel authors of the cookbook demanded that I lift the skin away from the meat with my finger and put whole garlic cloves underneath. Excuse me?

I put the whole thing in the oven and instantly realized why people love cooking chicken this way: you can walk away for an hour.  This, in cooking, is priceless.  Usually when I cook chicken, it’s stir-fry style and I have to stand there and move the chicken pieces around for twenty minutes.  With the whole chicken method, I’m watching Bethenny Getting Married and having a glass of wine.  Why didn’t I know about this sooner?

The resulting bird was really a thing to behold: all golden brown, perfectly crispy on the outside and tender and juicy on the inside (and by inside, I mean the meat…not the “cavity”).  Mike was astonished that such a thing of beauty would come from the work of my hands, especially since he knows about my aversion to poultry. 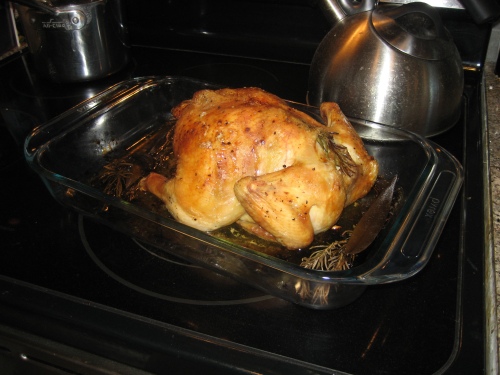 So now I am caught in a bind: do I make the chicken more often, considering how easy it is and how much Mike likes it?  Or do I banish forever the image of my hand up the backside of a bird?

11 responses to “The Chicken, the Whole Chicken and Nothing but the Chicken, so Help Me…”