As the World Turns…Around the East Coast

I am one of many long-suffering West Coast residents who has to deal with the inconvenient and at times infuriating East Coast bias that plagues our great nation.

Usually I handle this with a calm demeanor befitting a Victorian socialite attending afternoon tea.  This week, however, I am handling it with the anger and bitterness of a scorned lover who just found out her ex won the lottery.

What brought this fury to the surface?  The Olympics, of course.

Instead of watching the Opening Ceremonies in real time, in my time zone where they’re taking place, I have to be on nytimes.com getting the play-by-play from commentators watching it in New York.  Yes, the ceremony is actually occurring 141 miles north of my city, yet I’m forced to wait three hours so people 3,000 miles away can watch it first.

Here is a helpful visual to explain the situation: 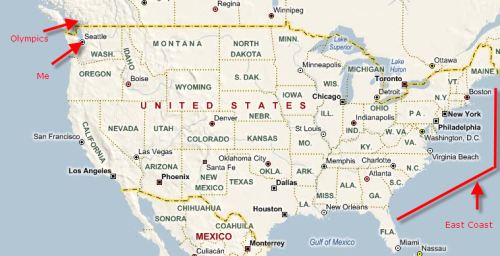 Of course, many would say that in the age of DVRs these issues are irrelevant.  To those scoffers, I offer this: DVRs were invented to record something that was on earlier that you want to watch later.  A DVR isn’t going to help much when the show doesn’t come on for three more hours.

When it suits them, the media moguls curse us with the opposite problem.  Consider the awards ceremonies: the Oscars, Emmy’s and Golden Globes all take place in L.A., yet start at 5PM PST — so that the East Coast can watch at the more appropriate 8PM hour.  While we’re racing to get through Sunday dinner or afternoon plans, East Coasters are settled in on their couches with popcorn ready to take in the show.

I can’t place all of the blame on the the men at NBC, CBS and ABC.  I’m happy to bring ESPN into the conversation.  How about a little coverage of our teams, gentlemen?  Does the word “Mariner” or “Seahawk” ring any bells with you?  The only reason anyone in Pittsburgh has heard of Seattle is because they remember paying refs to throw our Superbowl game.  And while East Coasters may bemoan Angels games starting at their 10PM, at least they aren’t sitting in church while the Yankee games start at 10AM.

This bias is pervasive enough to be found outside of programming.  My brother-in-law’s former clients are all in Alabama, and they used to insist he be available from the moment they arrive in the office.  So he would show up every day for work at 6AM and leave at 3PM to accommodate them.  My company headquarters is located in New Jersey, and while not required, I feel the same pressure.

A less obvious bias occurs in the collegiate arena.  The Ivy League is clustered in the Northeast, and it would seem anywhere outside of that region is irrelevant.  I went to the University of Washington, and I can imagine the laughs I would get applying for jobs in Boston.  Despite my school being ranked 16th in the world, it’s as if we don’t exist.

Speaking of schools, consider this bone-chilling encounter from junior high.  In 8th grade, when I found out I was moving from Pennsylvania to Seattle (the “other” Washington, according to East Coasters), a student in my class came up to me and said, “Seattle.  Hmm.  That’s just west of Chicago, right?”

In case you’re tempted to blame that tiny error on youth, consider the exchange I had with a fellow junior in college I met in Washington, D.C. while I was in town for a leadership conference.  In what I can only assume was a mild attempt at flirting with me, he said, “Oh, I meant to tell you I’ll be in San Francisco in a couple of months!”

“Great!” I replied, not understanding why he was sharing this information.

“We could do lunch!” he exclaimed.  “I’d love to get together again, and you live in Seattle so we could meet up for a meal.”

I stood there debating which would be more painful — taking a cheese grater to my face or explaining to this person that San Francisco and Seattle are not one but TWO states apart, separated by more than 800 miles.  I wanted to scream, “Would you tell a friend in Philadelphia to meet you for lunch in Jacksonville?!”  Instead I stared at him blankly until a friend listening in (thank you, Annie!) yanked me out of the conversation.

Is it obvious yet that I’m a former East Coaster?  Friends tell me I’m like a child who’s been spoiled; having lived in the center of the US universe, I’m sour now about orbiting my former planet.  Any armchair psychologist can see that all of my sputtering really means that I miss it.  I miss being in the eye of the hurricane, I miss feeling like I could pop into NYC at a moment’s notice (even if I rarely did).  I miss the what-does-your-daddy do elitism, the four-generations-and-we’ve-never-left-town families.  While living in Lancaster, Pennsylvania or Washington, D.C. I loved knowing I was in the historical heart of our country.

Now, 12.5 years into living in Seattle, I can say that I was blind to how good I had it — but I wouldn’t trade where I am for where I was.

Please don’t mistake my missing the East Coast as preferring to live there.  What that coast has in history, numbers of people, and bustling cities, this coast has in geographic splendor.  It’s no mystery why the Winter Olympics weren’t held on that side of North America: where would they find respectable mountains?  Skiing in the Appalachians?  Please.  New Hampshire? Those aren’t mountains;  they’re hills.  Whistler and Blackcomb belly laugh and high five each other when they make jokes about the slopes in Maine.

So this week as you West Coasters nestle into the couch to watch the women’s slalom, and you look at your watch and it’s 12:30AM, you’ll know exactly which region of the country to blame.

7 responses to “As the World Turns…Around the East Coast”